Salzburg vs AC Milan – For a number of seasons, most notably the previous one, Salzburg has been among the top teams in Austria’s top divisions. They won their seventh straight championship and a fourth consecutive Champions League ticket.

On Tuesday at Red Bull Arena, they will play their inaugural game against one of the top Italian teams, AC Milan. The two-time Champions League champions will be in good spirits to get off to a good start on Tuesday night.

Moving on, Salzburg now leads the Austrian Bundesliga standings with 18 points after winning six and losing one of their first seven league games. The team is currently on a six-game winning streak in various tournaments.

Despite the fact that their opponents have more exposure to the European elite fight, they will be determined to keep the momentum going. AC Milan, meanwhile, seemed to have continued where they left off from the previous season.

With 11 points, they are tied for first place in Serie A with Napoli, who currently holds that position. They have been undefeated from the start of this season. Keep in mind that they have scored 10 goals overall in the previous five games.

Twice, they have come to blows, 28 years ago, it happened during a Champions League group stage match. AC Milan prevailed in both games. The Red and Blacks will be seen as favourites here considering they belongs to the Italian top flight which is significantly stronger than the Austrian Bundesliga.

The Rossoneri’s exposure in the Champions League will undoubtedly be a factor in bookmakers’ perceptions of them as favourites going into this match. Additionally, they have a five-game winning run and 14 goals in their previous five road games. So anticipate a victory for the visitors at Red Bull Arena on Tuesday. 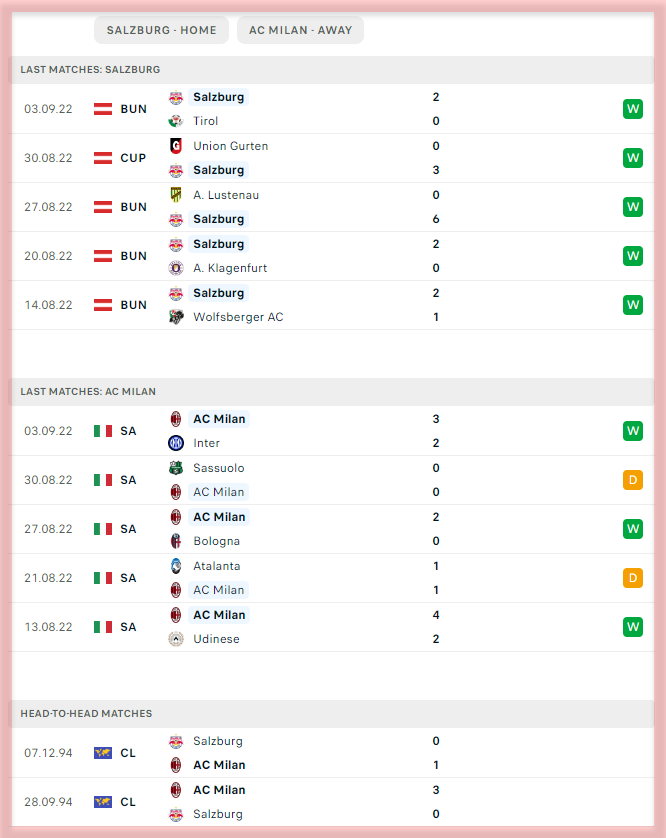