Salernitana vs Cremonese – Preview, and Prediction

Salernitana vs Cremonese -Salernitana stunned Lazio 1-3 away in the capital last weekend to clinch their third win in the last four Serie A games.

They will have a great chance to prolong this fantastic spell of form on Saturday afternoon with the home fixture against the rock-bottomed Cremonese.

Boulaye Dia continued his great form at the beginning of the season, netting his fifth Serie A goal of the campaign in the mentioned victory over Lazio in the previous round.

He should have plenty of space to keep delivered the goods in the final third this weekend as well since his team are about to face the joint-worst defensive line in the country on Saturday.

Cremonese sit at the very foot of the Serie A table after 12 rounds. They are still the only team in the top flight without a single win in this campaign.

To make things worse for head coach Massimiliano Alvini, his men have stopped delivering up front in the recent matches.

Cremonese failed to find the back of the net in the previous two league affairs despite facing the likes of Sampdoria and Udinese in the process.

On the other side, Salernitana will go into this tie in the highest spirits after the win in the capital and especially knowing they have also won two on the bounce at Stadio Arechi.

On top of form, Salernitana can rely on tradition here since they have won four, draw, five, and lost just one of the previous ten meetings with Cremonese.

Salernitana picked up two wins in the clashes against Cremonese in the 2020/21 Serie B campaign,Only two of the previous eight head to head outings between these two sides provided three or more goals.

We love the 2.10 odds offered for Salernitana to get the win here. The hosts will be highly motivated to maintain their strong spell of form and they will get a nice chance to do so against the weakest team in the league.

Salernitana vs Cremonese -Head to Head 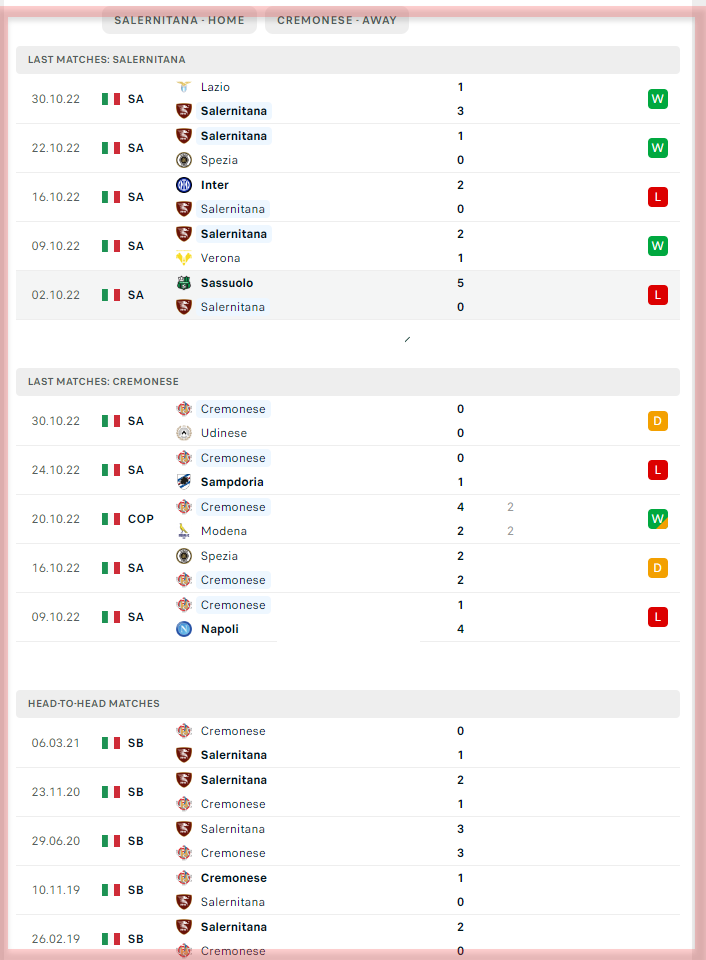