RSC Anderlecht vs KAA Gent – After losing to Union Saint-Gilloise by a score of 2-1 in the First Division A last time out, RSC Anderlecht won’t want a repeat of that performance here.

RSC Anderlecht had 52% of the possession in that game and 5 of their 9 shots on goal were successful. Amir Murillo (12′) was the lone RSC Anderlecht scorer.

The RSC Anderlecht defence has worked extremely hard, as evidenced by their most recent results. In their last six games, RSC Anderlecht have only allowed four goals to enter the net, demonstrating their ability to maintain control.

But we’ll simply have to wait and see whether the pattern holds in this game or not. RSC Anderlecht’s performance in the past demonstrates that they have lost all seven of their league games to KAA Gent are unbeaten in their past seven home league games.

KAA Gent and their supporters will be hoping for a better outcome after losing their previous First Division A match against Antwerp. KAA Gent had a 53% possession advantage and made 13 shots on goal, four of which were successful.

Sven Kums (10′) was the lone scorer for KAA Gent. Royal Antwerp, on the other hand, had 6 shots total, 4 of which were on goal. For Antwerp, goals were scored by Vincent Janssen (15′) and Michael Frey (27′).

Looking at their recent results, KAA Gent has allowed opponents to score in 6 of their previous 6 games, resulting in a net score of 9. KAA Gent appear to have several weaker spots in their defence.

There aren’t many selection concerns, with Felice Mazzù, the manager of RSC Anderlecht, just having to worry about one player’s fitness out of an otherwise full roster. Adrien Trébel is out with a shoulder injury.

Hein Vanhaezebrouck, the manager of KAA Gent, must make a selection from a group that has some fitness issues. Tarik Tissoudali (Cruciate Ligament Rupture), Julien de Sart (Adductors avulsion), and Elisha Owusu (Syndesmotic Ligament Tear) cannot be taken into account.

All things considered, KAA Gent will need to put on a strong performance to be putting a goal past this RSC Anderlecht team, who we believe will be able to score themselves in a successful performance. Due to this, we expect RSC Anderlecht will win by a score of 1-0 at the conclusion of play. 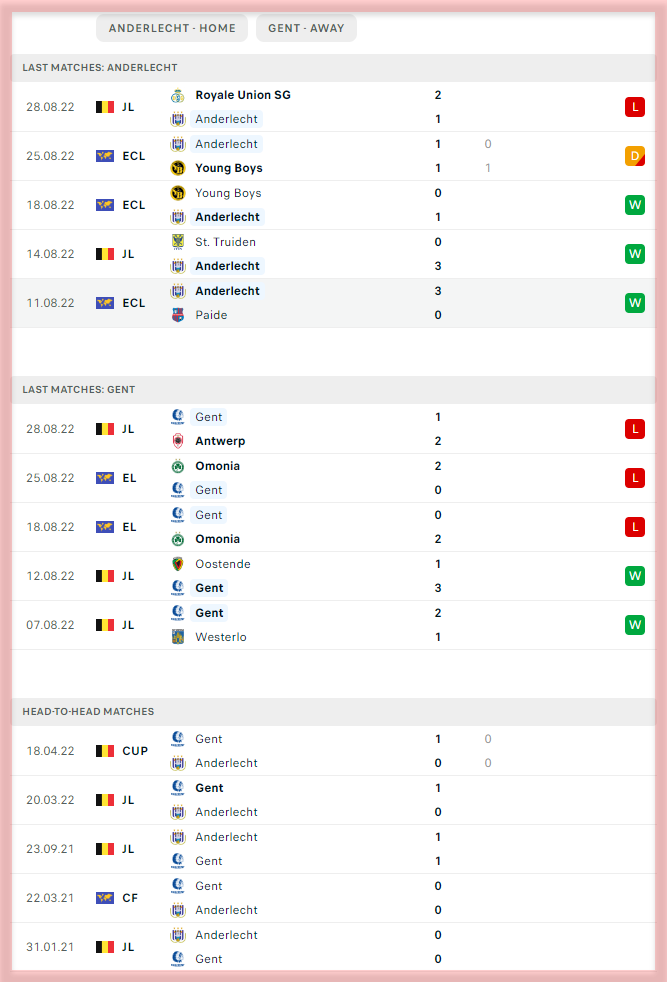