Ross County vs Aberdeen – All of the games on Matchday No. 6 will be played in the shadow of the Old Firm rivalry, but the match between Ross County and Aberdeen that is scheduled to take place at Global Energy Stadium on Saturday could turn out to be one of the more intriguing matchups of the day.

After a dominating 5-0 victory over ten-man Livingston seven days ago, Aberdeen will come into the match with far greater spirits than they had before. Bojan Miovski, a forward for Macedonia, continued his incredible run of form by scoring twice on this occasion. He finished with a brace.

Miovski has added five goals to his career total, and there is little question that he will be Ross County’s primary goal-scoring danger on Saturday. The bookmakers have Aberdeen pegged as the favourites to win this match, despite the fact that they have a record of three victories and two losses through the first five rounds.

On the other hand, we can’t overlook the fact that the Dons had a difficult time performing well away from home in the Premier League during the previous season.

The previous year, Aberdeen finished third from last in the Relegation Group, and they had a dreadful record of 10 losses in 17 games played away from home during the regular season.

On the other hand, Ross County started the 2022–2023 season far more slowly than their opponents, losing four of the first five games of the season. Nevertheless, Malcolm Mackay’s soldiers have already played the likes of Celtic, Rangers, and Hearts in the opening five rounds.

The lone victory for Ross County came in their most recent match at home, when they defeated Kilmarnock by a score of 1-0 at Global Energy Stadium.

In the previous four matchups against Aberdeen, Ross County’s record was two wins, two draws, and two losses. In the overall head-to-head record, Aberdeen leads Ross County by seven wins heading into the 30th meeting between the two teams.

In the three prior head-to-head matchups between the two teams, there was never a game in which there were three or more goals scored. We are confident in asserting that the bookies have grossly undervalued Ross County in this scenario, as seen by their pricing of the team at ridiculously high odds of 4.00 to triumph in front of their supporters in Dingwall.

We are going for the value, backing the home win option here at the 4.00 odds, as Aberdeen had a terrible season on the road last year, and we were battling severely to perform on the road.

Given that none of the most recent three head-to-head matchups between these two teams produced three or more goals, we will also go for the Under 2.5 goals FT bet, which has odds of 1.72. 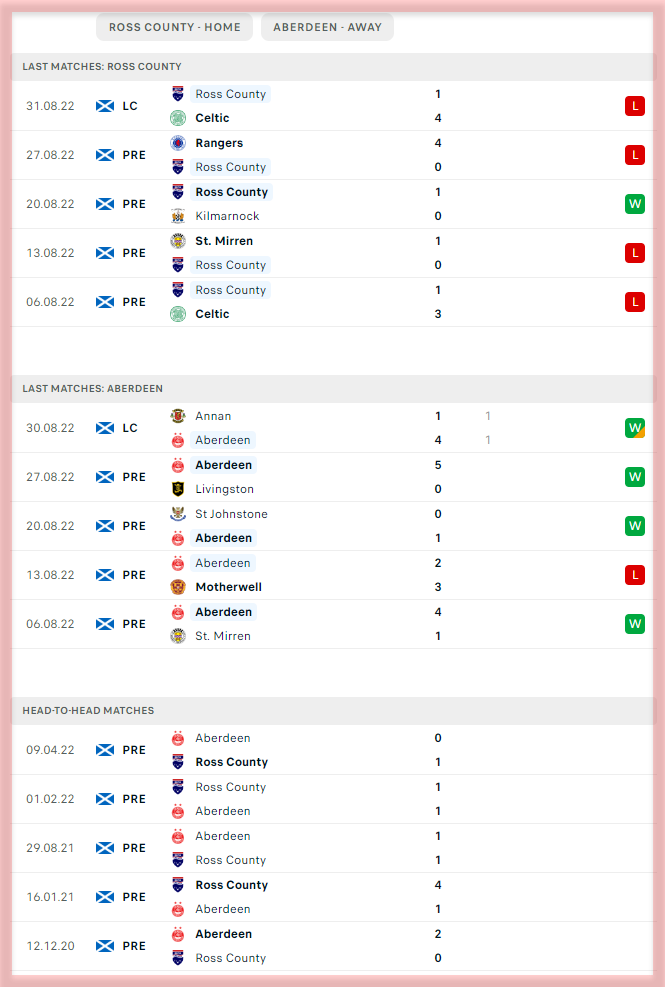