Rosenborg vs Sandefjord – Preview, and Prediction

Rosenborg vs Sandefjord – Rosenborg has had a slow start to the season. So far, they’ve won one, drawn three, and lost one of their five league games. They will, however, be pleased with the fact that they avoided defeat four times out of the five games.

Rosenborg suffered their first loss of the season in an away encounter against Stromsgodset. They’ll be trying to extend their unbeaten streak with a win in this match, which will give them home field advantage.

Sandefjord, on the other hand, has had a shaky start to the season. This season, they have won two and lost three of their five league games. The part where they must concentrate is when they are recording a defeat. They’ll be trying to improve on their performance in the upcoming league match.

In their most recent league match, Sandefjord were defeated 1-3 at home by Valerenga. It was their third loss in the league in the last four games. Such a streak is never impressive, and they must break out of it.

Since 2006, Rosenborg has never lost to Samdefjord, and they’ve won eight of their last ten meetings with Sandefjord. Seven of the last ten head-to-head meetings have been high-scoring affairs.

This season, Rosenborg has gone undefeated at home. So far this season, they’ve won one and drawn one of their two league games at home. Their spirits will be high, as they have a long winning streak over Sandefjord and have been unbeaten for more than a decade.

Sandefjord, on the other hand, has won two and lost one of their three road games so far this season. Their strong performances, though, came against teams from outside the top half of the current table.

Furthermore, they have had a bad head-to-head record versus Rosenborg for years. Based on the aforementioned data, we believe Rosenborg will defeat Sandefjord in an Eliteserien match on Monday. 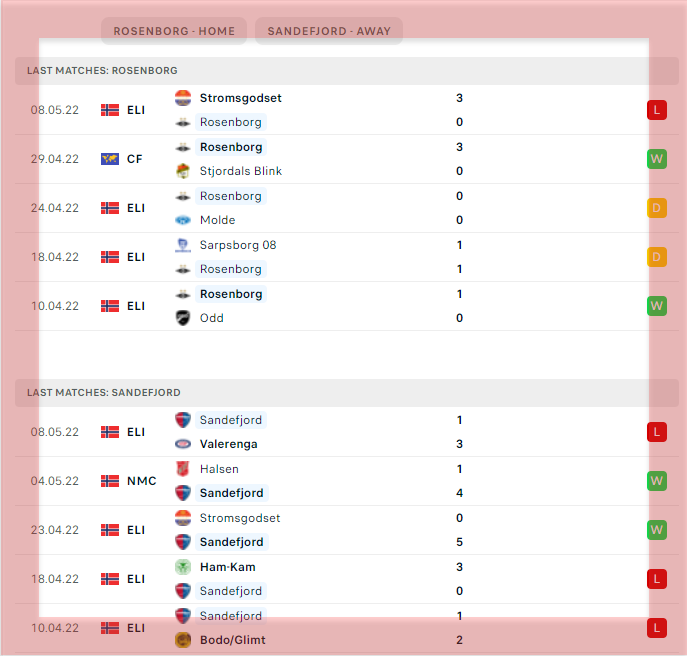