Rosenborg vs Haugesund – Preview, and Prediction

Rosenborg vs Haugesund – Rosenborg’s matches have failed to provide the desired results. So far, the team has competed in seven matches, winning two, drawing four, and losing one. The squad is now in eighth place in the league table, with 10 points from their matches, due to the lower number of losses in the match. In the majority of their games, Rosenborg has added on the scoreboard.

Haugesund’s winning streak came to an end with the loss in the most recent encounter. So far, they’ve played eight games. The team has two victories and six losses to their credit in the encounters. Because of their shaky start, the squad has remained in the bottom half of the standings, in 15th place, with only six points from six games.

Haugesund’s inability to win most of their games puts them at a disadvantage when they face Rosenborg. Both Rosenborg and Haugesund, on the other hand, have contributed in the majority of their encounters thus far.

So far, Rosenborg has played three matches on their home turf. So far, they haven’t lost a single match at home. Two of the three matches have concluded in victories, with the side keeping clean sheets in both. So far this season, Haugesund has made four road trips. They lost their first three matches before winning their last one. Until their recent victory, the club had never scored more than 1.5 goals in a game. Based on the statistics, I anticipate Rosenborg will win this match. We may anticipate Rosenborg to keep a clean sheet after keeping clean sheets in two of their last three home matches.

Rosenborg vs Haugesund – Head To Head 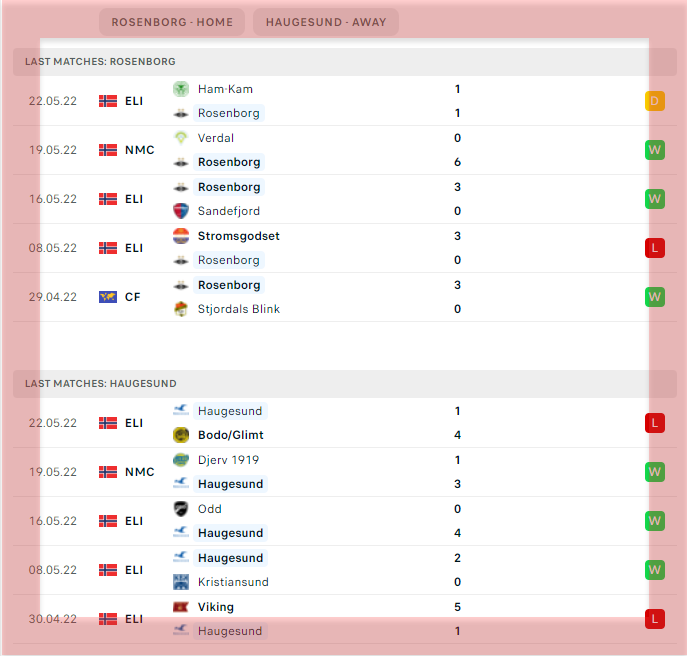