Rosario vs Gimnasia – Preview, and Prediction

Rosario vs Gimnasia – On Friday, Gimnasia, one of Argentina’s five remaining unbeaten teams in the Primera Division, will meet Rosario Central at Estadio Gigante de Arroyito.

Rosario are unbeaten at home in the second round but have dropped their two road encounters, while El Lobo overcame Racing Club 3-1 and boast a record of two victories and a pair of draws in this phase.

It will be Carlos Tevez’s first season in charge of Canalla, who are currently 22nd out of 28 clubs in the Primera Division. Tevez is a legendary Argentine footballer.

It will be the first taste of coaching for the former Manchester United, Manchester City and Juventus player, who also won several domestic trophies in his native Argentina.

Rosario could use some of his goalscoring secrets, since they registered the second-fewest goals in group B in the opening phase of this domestic competition (16).

To date in this round, they have gone goalless in three of their four games and have not found that consistent killer instinct in the final third. A lack of offensive prowess hasn’t stopped them from keeping three clean sheets in their last four league games at Estadio Gigante de Arroyito, where they play now.

Domestically, Academia possesses a beneficial record against the club from La Plata, winning three of their four league meetings against them at home, conceding a total of two goals throughout that time.

At this stage in the season, Gimnasia had gone nine games without losing in all competitions and are third in their group, two points behind Newell’s Old Boys.

Their defensive formation, which struggled to contain other teams when on the road, have looked a lot more compact and stingier lately, surrendering a goal or fewer in five consecutive domestic fixtures away from home.

That is a significant improvement from how they started this domestic campaign, surrendering 11 strikes in their first four league encounters between February and March.

It should come as no surprise that manager Nestor Gorosito has a team that has scored the second-most goals in the second round of this competition (seven goals) thanks to his own playing career as Argentina’s leading goal scorer in 1988-89.

When scoring first, they are a tough club to compete with, failing to lose a league encounter all season in that situation and without a defeat domestically in 2022-23 when holding a second-half advantage.

Rosario vs Gimnasia – Head -to -Head 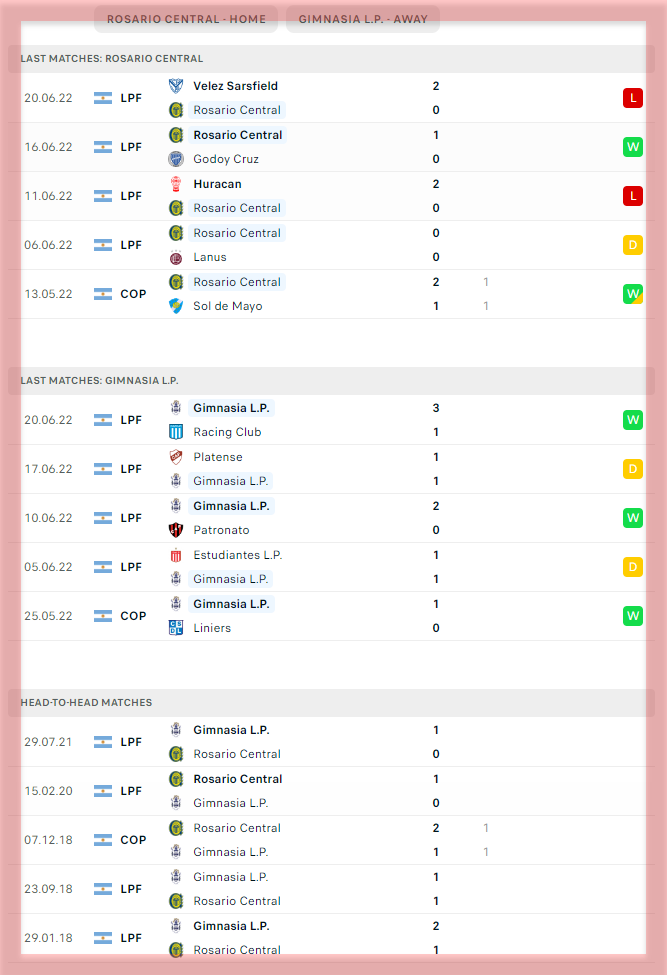