Roma vs Wolfsburg – Preview, and Prediction

Roma vs Wolfsburg – Roma Women host Wolfsburg Women in the Champions League on Wednesday. They’re unbeaten in 12 matches across all competitions, while the visitors have won all 11 games this season.

In their most recent outing, Roma claimed their sixth consecutive Serie A victory with a 2-0 home win over Sampdoria thanks to goals from Manuela Giugliano and Sophie Roman Haug.

While that result leaves Roma four points clear at the top of Serie A, they will turn their attention to Wednesday’s Champions League meeting with Wolfsburg.

The Italian side came from two goals down to take a 4-2 lead against St Polten in their previous Champions League match, and although they conceded a third goal, they held firm to claim a 4-3 victory, ensuring that they have maximum points after two group games.

Despite winning all seven of their home matches this season, Roma will face a tough test against the two-time European champions.

Wolfsburg are looking to win their first Champions League trophy since 2014, although they reached the final as recently as the 2019-20 season.

Like their hosts, Wolfsburg are also top of their domestic league by a four-point margin after collecting maximum points from all seven of their Frauen-Bundesliga games.

Impressively, Tommy Stroot’s side have won all 11 of their competitive fixtures this season, scoring at least two goals in every match.

In their two Champions League outings, they have cruised to a 4-0 victory over St Polten before they claimed a 2-0 away win against Slavia Prague.

Despite being in fine form, Wolfsburg had to settle for a point in their most recent trip to Italy when they played out a 2-2 draw against Juventus in last season’s group stage.

The hosts are currently unable to call upon the services of Lucia Di Guglielmo, who has not featured since September due to an injury issue.

Camelia Caesar, Elisa Bartoli, Carina Wenninger and Emilie Haavi dropped out of the starting XI for Saturday’s win over Sampdoria, but they are all expected to return to the side against Wolfsburg.

Meanwhile, Valentina Giacinti will feature in the forward line, and the Italy international will be looking to add to the eight goals that she has scored in all competitions this season.

As for the visitors, they could be without Germany international Lena Oberdorf, who missed Sunday’s DFB-Pokal win over Nuremberg due to a shoulder injury that she picked up on international duty.

Kathrin Hendrich will continue her midfield partnership with Dominique Janssen, and with the German champions yet to concede in the Champions League this season, the pair will be looking for another clean sheet.

Ewa Pajor has scored three goals in Wolfsburg’s two group games, and she will pose one of Wolfsburg’s main goal threats on Wednesday.

Roma vs Wolfsburg – Head To Head 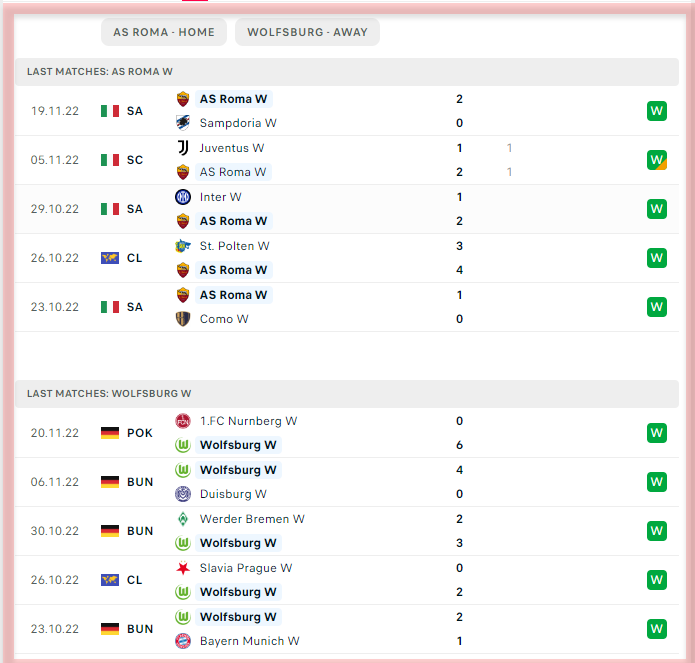