Roma vs Venezia – Preview, and Prediction

Roma vs Venezia – In this final stretch of the season, three teams, one of which is Roma, are battling it out for the sixth spot, which would guarantee them a spot in the Europa League the following season. Roma is in sixth place, Fiorentina is in seventh place, and Atalanta is in eighth place. With only two games left in the competition, all of these teams have 59 points on the board, and the race has reached an unparalleled level of tension.

It goes without saying that the remaining six points are crucial for all three teams, and expect Jose Mourinho’s men to give it their all on the field this weekend to win. It’s also worth mentioning that they’re playing at home against the weakest team in the Italian top flight this season.

Venezia is ranked 20th in a table of 20, and they need a six-point advantage to make the playoffs. That implies that even if they maintain a flawless winning record for the remainder of the season, they will only have a statistical chance of staying in the Italian league.

They already have a weak defence and are now compelled to play for the victory. Roma will undoubtedly take advantage of the circumstances and attempt to secure a resounding victory.

The final matchday, Roma lost 2-0 on the road to Fiorentina. However, they have gone undefeated in 19 of their last 23 games overall, including an 11-game winning streak at home.

Seven of the players were wings, and they had won four of their previous five home games. Venezia, on the other side, defeated Bologna 4-3 at home the previous game week. However, they were on a 10-game losing run prior to that, as well as a 6-game losing streak on the road. It’s also worth noting that they’ve only won three times on the road in the last 12 months ,Considering these factors, expect Roma to prevail against this freshly promoted team to the first flight. 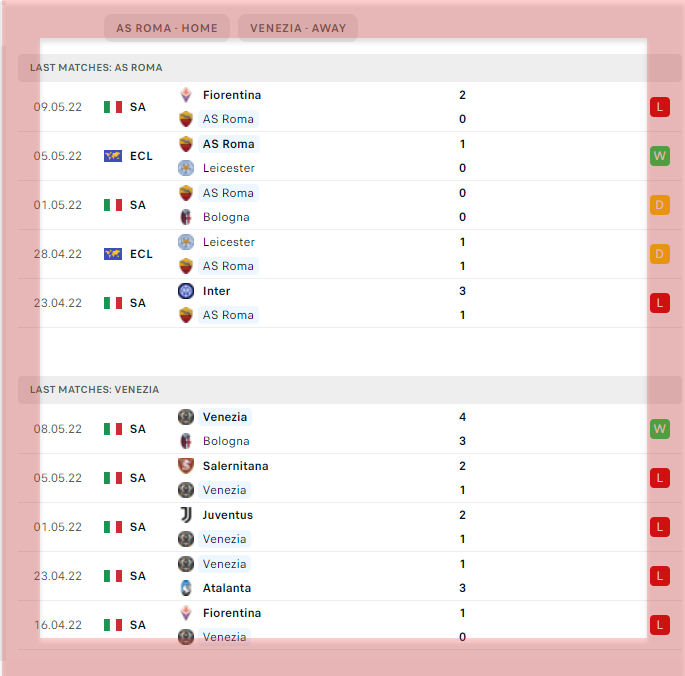