Roma vs Salernitana– preview and prediction

Roma vs Salernitana–  On Sunday afternoon, Roma will face the bottom-placed Salernitana at Stadio Olimpico, with a chance to extend their Serie A unbeaten record to ten games.

In their previous five league games, the Romans have won four and drawn one, and they are now only five points behind Juventus in fourth place.

Will Jose Mourinho and his team be able to compete for UEFA Champions League football next season if they maintain their current form in the final seven games of the season?

They lost 2-1 to Bodo/Glimt in the first leg of the UEFA Europa Conference League quarterfinal on Thursday evening, and Mourinho may make some changes to his starting lineup for the rematch on Thursday.

Nonetheless, we must mention Roma’s remarkable defensive record in Serie A, as La Lupa has only conceded one goal in the last five games. The topic concerns a 3-0 thrashing of Lazio in the Rome derby.

Salernitana is the weakest team in Italian football’s elite division, and they don’t stand a chance against an in-form Roma side.

The visitors are nine points behind the relegation zone, and only a miracle will keep them from being relegated to Serie B next season.

Salernitana will go to the capital having gone winless in ten league games and failing to score in their past two defeats to Juventus and Torino.

In the first half of the season, Roma beat Salernitana 0-4 at Stadio Arechi in the opposite match.

The two teams previously met in the 1998/99 Serie A season, with each team claiming a win (both on the home patch).

Three or more goals were scored in each of the last three head-to-head games between the two sides.

In the last five Serie A games, Roma has only conceded one goal. Salernitana has the league’s lowest attacking record and will travel to Stadio Olimpico after failing to score in their last two league games against Turin opponents.

The home win to nil is thus the best to bet here at 2.00 odds, but Roma to win by two or more goals differential at 1.80 odds is also a possibility.

Roma vs Salernitana -Head -to- Head: 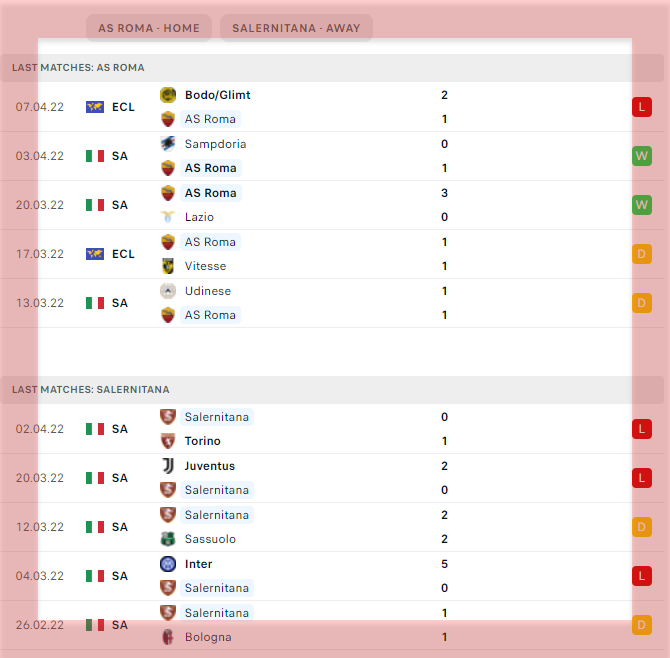