Roma vs Ludogorets – Preview, and Predictions

Roma vs Ludogorets – For second place in Group C of the UEFA Europa League this season, Roma will host Ludogorets Razgrad.

The team has a perfect record in the group with seven points after five games. After defeating Roma 2-1 on the first day of the season, the visitors must win or draw to move on to the round of the last 32.

On Monday night in Italian Serie A, Roma had a challenging away match against Hellas Verona. Thus, fatigue may very well be a factor in this situation, especially given the fact that the Romans have a significant Derby della Capitale scheduled for Sunday.

It would be intriguing to watch if Jose Mourinho switches up his starting lineup for this match even if he is aware that the squad can only advance to the next round with a win.

In the Special One’s 1-2 victory over HJK in the Finnish capital last week, a highly capable team took the field. Roma managed to score a crucial three-pointer on this particular occasion, with Tammy Abraham among the goal scorers.

This season, the Romans are often having trouble entertaining their supporters. They had dropped three of their previous four home games across all leagues.

The defeat to Real Betis in the most recent Europa League match at Stadio Olimpico is included in the losing streak.

In the past, there was no chance for Roma and Ludogorets to face off, and at the start of the 2022–23 Europa League season, in early September, they faced off for the first time. Surprisingly, Ludogorets won the game 2-1 in front of the home crowd in Razgrad.

The Italians are huge favourites according to the bookmakers, but we truly struggle to understand the value in backing the home team at 1.33 odds given that they already lost to Ludogorets at the beginning of the season.

As an alternative, you can try a 1-1 correct score choice at 9.50 odds. Instead, we will support Ludogorets to win in +1.5 Asian Handicap as the primary betting option. 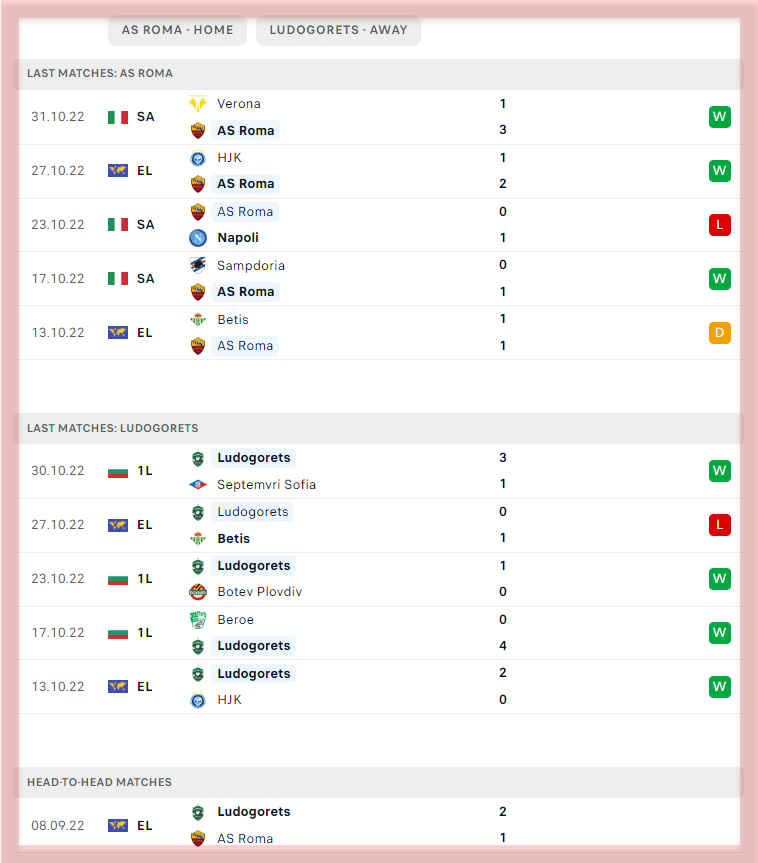