Roma vs Lazio – Preview, and Prediction

Roma vs Lazio –It’s time for another Derby Della Capitale, as Roma and Lazio will square off in the Stadio Olimpico on Sunday.

An introduction to the city derby against ferocious rivals could not have been worse, in Lazio’s opinion. Seven days earlier, they were humiliated 1-3 at home by Salernitana, among others. The defeat dropped Maurizio Sarri’s team to fifth place in the standings.

Going into the Derby Della Capitale, they are now one point behind Roma. With only eight goals allowed in the first twelve games, Lazio has one of the greatest defensive records in the entire league.

The team’s trust in its back line going into such a crucial match, though, can be called into question after they conceded three goals against Salernitana their last time out.

I Biancocelesti’s issues arise at the other end because they are missing their talisman Ciro Immobile (out through injury).Can Roma under Jose Mourinho capitalise on Immobile’s absence and win the derby?

Even though La Lupa didn’t play well against Verona on Monday, they were still able to win thanks to a pair of late goals from replacements Cristian Volpato and Stephan El Shaarawy.

In the previous 64 derbies between Roma and Lazio, the team won 25, tied 20, and lost 19. In March of this year, Roma also celebrated a crushing 3-0 victory in the prior Derby Della Capitale. In three of the previous four head-to-head matches between the fierce Roman rivals, there were at least three goals.

Lazio and Roma have both had erratic seasons so far this year. Due to our lack of confidence in either team’s offensive line right now, we believe that the Under 2.5 goals FT is one of the best betting options for this Derby Della Capitale.

Lazio is unquestionably the better bet at 3.80 odds in this encounter. In order to up the ante, we will pick Lazio to win and Under 2.5 goals FT at the absurdly high 8.00 odds. Alternately, you can receive the same odds by betting on a tie at halftime and Lazio’s victory at the conclusion.

Roma vs Lazio – Head -to- Head 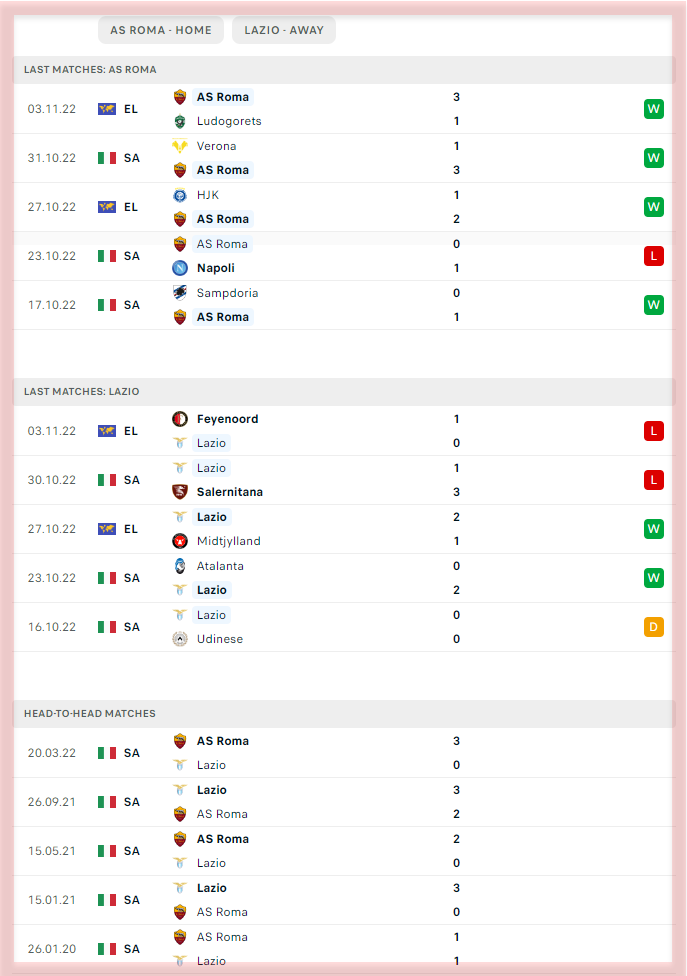