RKC Waalwijk vs Heracles –  This Wednesday, RKC Waalwijk will host Heracles Almelo at Mandemakers Stadion. There are only two points between the two teams, and they are both in last place. The home team needs to win badly because they are close to the bottom.

Heracles is 13th in the standings with 34 points from 32 games. They won the league nine times, tied seven times, and lost 16 times. The away team needs to get back on track because they haven’t won in their last two games. Also, they need to get better at coming in third.

The last game Heracles played was a road game against Willem II, which they lost 0-2. There haven’t been many goals scored between them and the other team in 5 of their last 6 matches. Heraclieden only scores an average of 0.83 goals per game.

On the other hand, RKC Waalwijk has 32 points and is in 14th place on the table. In the league, they won 7 of the 32 games they played, tied 11 of them, and lost 14 of them. They are only three points above the bottom of the league, and they need to work on their defense because they have been giving up goals lately.

RKC is coming into this game after a 1-1 draw with SC Cambuur in the Eredivisie. They haven’t scored in two of the last five games, so things haven’t been going well for them in front of the goal.

Waalwijk is under more and more pressure because they are only three points away from the bottom of the league. Their Dutch top-flight team’s luck could change at any time if they made a mistake and a bottom-three team jumped on it.

Even though Heracles played 16 games away from home this season, they only won twice. In seven of their last ten away games, they have given up two or more goals.

In the other half of their home games this season, RKC has yet to lose. Since both teams are weak, we think that a home win or a draw is most likely. 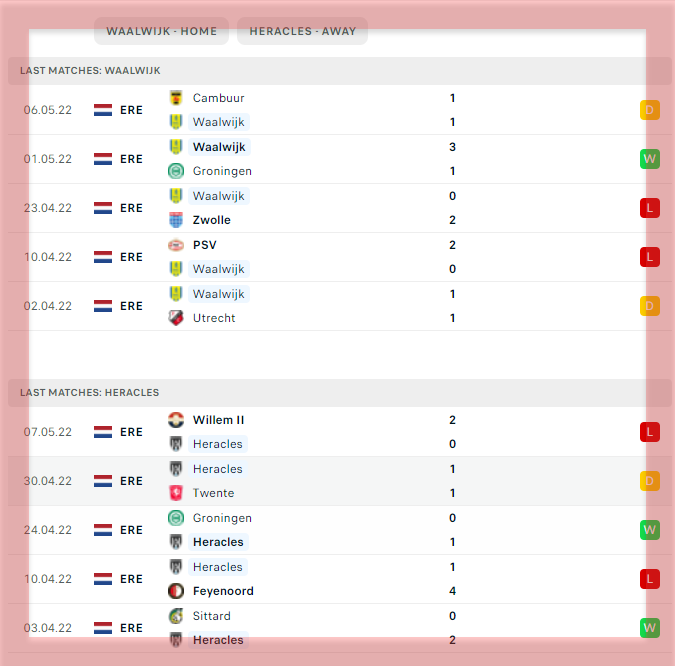