Rizespor vs Sivasspor – Preview, and Prediction

Rizespor vs Sivasspor – Rizespor’s recent matches have showed a little improvement in their play, but it is not enough to propel them up the table. They had struggled throughout the season, finishing in the bottom half of the league standings.

With 36 points from their matches, the team now sits first in the relegation zone. They are seven points behind the team above them in the table, and with only two games left, they have no hope of surviving relegation.

Rizespor’s most recent encounter was against Yeni Malatyaspor. Rizespor scored three goals in the encounter, while Yeni Malatyaspor only managed one, resulting in a 1-3 FT win for Rizespor.

Sivasspor’s form has been erratic throughout the season, resulting in a mixed bag of results. The team has four wins, two ties, and four losses in its previous ten games.

With 48 points from their matches, the squad is presently ranked 12th in the league. With their current standing, they have also clinched a spot in the Super Lig for the following season.

Sivasspor’s last match was against Kasimpasa. Kasimpasa scored three goals before Sivasspor’s first goal, which came in the 90th minute. Sivasspor lost the match 1-3 on the penalty kicks.

The previous h2h finished in a 1-1 FT draw, and since 2016, Sivasspor has not won any of their matches. Under 2.5 goals have been scored in the last four head-to-head meetings.

Rizespor’s dismal play has pushed them into the relegation zone as the first team. They have, nevertheless, shown signs of improvement in recent contests. In recent matches, Sivasspor’s performance has been variable.

Their two-game winning streak came to an end against Kasimpasa. In their previous five home matches, Sivasspor has two wins and three losses. In both of their victories, they scored over 1.5 goals.

Sivasspor has won all four of their away matches. They’ve also scored over 1.5 goals throughout the games. I feel the game will most likely conclude in a tie or a win for Sivasspor. Both teams are expected to contribute to the scoreboard. 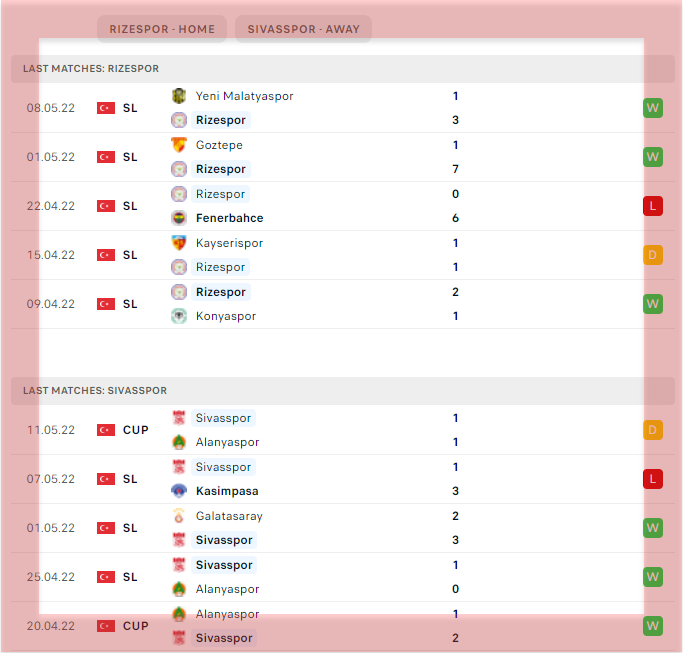