RFS vs Fiorentina – Preview, and Prediction

RFS vs Fiorentina – RFS no longer have anything to play for because they were eliminated from the Conference League. However, Fiorentina stand to benefit greatly from this.

They now hold the second spot in the table and are tied for first with the leaders in points. This Thursday at the NSB Arkadija, they will do everything in their power to win.

The only group member with a flawless winning record is the Italians. In fact, they are the only team to have gone at least unbeaten over that span.

They are competing with group leaders Basaksehir for the title of group champion. And 11 points have been scored by each team.

This final matchday in the group stage is crucial as a result. This Thursday, the Italian team will be hoping to win as Basaksehir loses ground in the standings. The Italians’ one advantage is that they are playing the weakest team in the group. RFS has not yet recorded a victory in the competition.

They too have a 100% losing record, with the exception of two draws. It should be noted that they have only scored two goals in their five games, the fewest of any team in the group. According to the current situation, Fiorentina should triumph on Thursday.

A 1-1 draw resulted from the sides’ lone meeting. RFS just managed one victory throughout the course of the last entire month. They’ve been awfully inconsistent recently and are allowing a ton of goals.

They are unable to consistently put on a strong display, not even for their home audience. Fiorentina, on the other hand, is a powerhouse in one of Europe’s top leagues.

They recognize their good fortune in being pitted against the weakest team in the group and are motivated to win the top spot at any costs. You can count on the Serie A team to have a successful outing this Thursday.

RFS vs Fiorentina – Head To Head 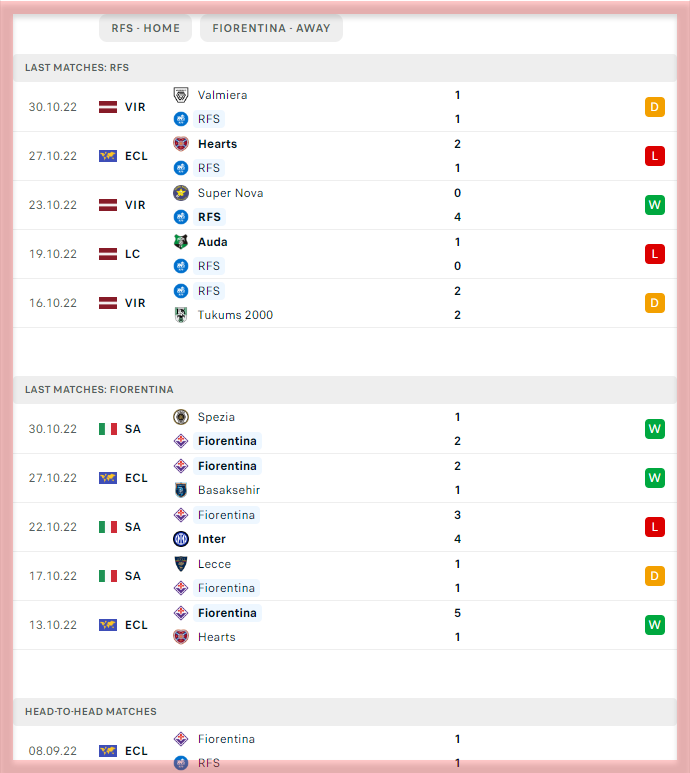