Rennes vs Troyes – preview and prediction – team news, and lineups

Les Rennais are presently in a position to return to the Europa Conference League, trailing Monaco and Lyon on goal difference in fifth place, although Troyes lost 5-1 to Brest in their previous encounter.

Bruno Genesio and his team have had an up-and-down year thus far, having yet to win consecutive games in 2022, although remaining very much in the European mix for next season.

They were left to repent their half-chances squandered last Friday in Paris, as the Parisians grew in confidence as the game progressed, putting the team from Brittany under immense pressure in the second half, eventually conceding a 93rd-minute goal to Kylian Mbappe.

Last Sunday, as Troyes coach Bruno Irles called it, was a failed encounter for his team, which was terribly exposed defensively against Brest.

That was the second consecutive away game in which ESTAC conceded twice in the first half while failing to respond, something Irles blamed himself for following their match against Les Pirates.

The 46-year-old coach believes we haven’t seen the most of what this team is capable of, and he’ll want to bring more out of them in attack moving ahead, an area that has been a sore point all season, with the team scoring the second-fewest goals in the league (21), trailing only Lorient (20).

Martin Terrier and Gaetan Laborde, who are tied for the team lead in goals with 11, have each scored once in their last two home games, putting them one goal behind Jonathan David and Mbappe for second place in the league.

Lovro Majer, a midfielder for Les Rennais, has quietly had a good first season, with six assists, one fewer than Lionel Messi, Amine Gouiri, and Ludovic Ajorque, who are tied for second in the league.

Last weekend, Adil Rami scored his third goal of the season for ESTAC, tying him for second on the squad with Mama Balde, while Rominigue Kouame picked up his second assist of the season.

Renaud Ripart and Suk Hyun-Jun are both expected to be sidelined until late February due to thigh and unknown injuries, respectively, while Karim Azamoum is unlikely to return until May due to an ACL injury. 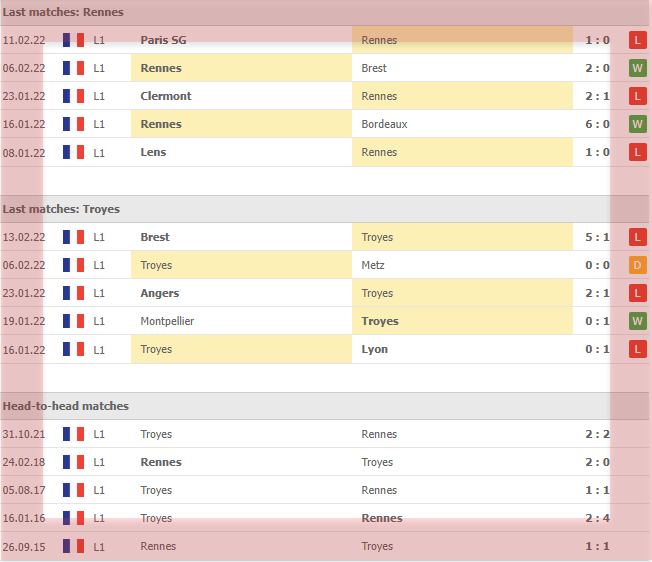