Rennes vs Leicester City – Leicester recorded a confidence-boosting 2-0 win at home in the first leg, giving them a clear advantage in this rematch.

Rennes, on the other hand, are in spectacular form, particularly at home. They’re determined to make a comeback, and it’s safe to say that sparks will fly at Roazhon Park.

Rennes must recover from a two-goal deficit, and they will have no choice but to attack from the start.

All of this points to a high-scoring thriller between the two tomorrow. Rennes defeated Arsenal in the Europa League at this stadium in 2018-19.

They had also drawn 2-2 against Tottenham in the Conference League group stages. Meanwhile, Leicester had won the first leg of this tie 2-0 at home. Rennes had won four of the previous five overall matches, scoring two or more goals in each of these four games.

They are also on a five-game winning streak at home, and they have scored 14 goals in their previous four games here.

Leicester, on the other hand, had won four of their previous five games, with their only defeat coming against the in-form Arsenal.

Both the Foxes and Rennes are in good form, and with the latter under pressure to overcome a two-goal deficit, expect attacking football from the start. This Thursday, expect plenty of goals.

With the exception of PSG, Rennes has scored the most goals in the French top flight. Only two goals separates them from the Parisians.

In the meantime, the Foxes have scored two or more goals in five of their last eight games. They’ve also done it on two of the previous three road trips. 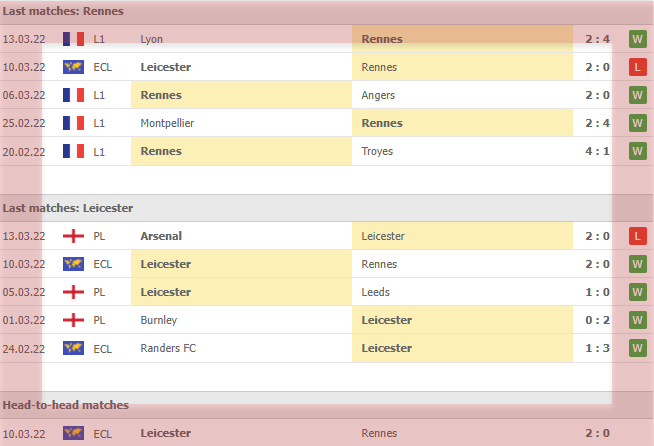