Reims vs Strasbourg – preview and prediction – team news, and lineups

Reims vs Strasbourg – Strasbourg will face Reims at the Stade Auguste-Delaune II this afternoon in the hopes of climbing into the Champions League qualification positions in Ligue 1. Les Rouges Et bBancs will try to make it three games in a row without losing at home, while the visitors have not lost in any of their last four away games.

They’ll be trying to build on that performance when Strasbourg, a Champions League contender, visits Stade Auguste-Delaune II for the 27th round of Ligue 1 action this afternoon. Strasbourg is having one of its most prosperous seasons in decades. They are currently in fifth place in the Ligue 1 table, only three points behind third-placed Nice.

Last Saturday, Strasbourg had a fantastic opportunity to close the gap on Nice by having an extra player on the pitch against them for the whole second half of the match at Stade de la Meinau.

Nice’s rock-solid defense, on the other hand, held on to a goalless draw, putting Strasbourg three points behind in the race for third place and a place in the UEFA Champions League next season. The visitors, on the other hand, have now won four straight league games. During this time, they have each won and drawn two games.

Strasbourg has scored at least two goals in four of their previous five Ligue 1 away games, which is unsurprising given their lethal attacking pair of Ludovic Ajorque and Kevin Gameiro.

Reims has scored a goal in each of their last five matches in all competitions. Monaco 1-2 was dispatched on the road seven days ago. In four of their previous five Ligue 1 road games, Strasbourg has scored two or more goals. The 1.90 chances for Both Teams To Score are quite appealing to us. At 2.90 odds, daring bettors might go for the draw. 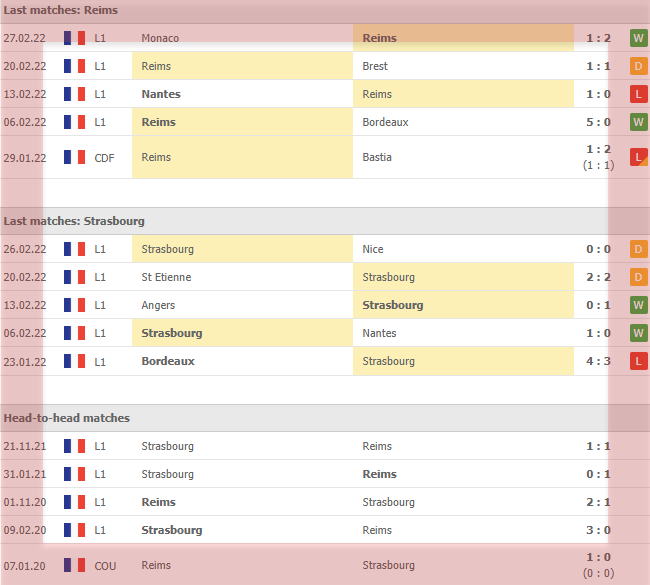