Reims vs Lille – Preview and Prediction

Reims vs Lille – Following the triumph of the previous season, Lille went into this season with high expectations. The title holders were in the best of spirits to do so again. However, they failed to achieve so because their form has been uneven since the start of the season. As a result, they are currently five points out of the playoffs and 26 points out of first place, which they won last season.

Lille’s most recent league match ended in a 1-2 defeat at home against Lens. It was their third game in a row without a win in the league. They will be hoping to halt their current winless streak by winning the forthcoming league match on the road.

Meanwhile, Reims‘ recent home form has been dismal. They’ve had a shaky overall record, and the fact that they’ve had some poor results recently isn’t surprising. With 37 points, they are presently in 13th place.

Reims’ most recent league match was a disappointing goalless draw on the road against Montpellier. It was their fourth game in a row without a win in the league. Even though they have home advantage in the upcoming league match, they will not be in a better mood because they have been on a disheartening winless streak in the league recently.

Lille has won all three of their previous meetings with Reims.
Six of their last eight head-to-head games have been low-scoring affairs.
Lille won 0-1 in their most recent meeting at this location.

Lille, on the other hand, has gone undefeated in their last four league road games. Three of those games were won with a clean sheet.

They’ll be in great spirits heading into this match against Reims, knowing that their current form is more than enough to secure a victory when the final whistle sounds. 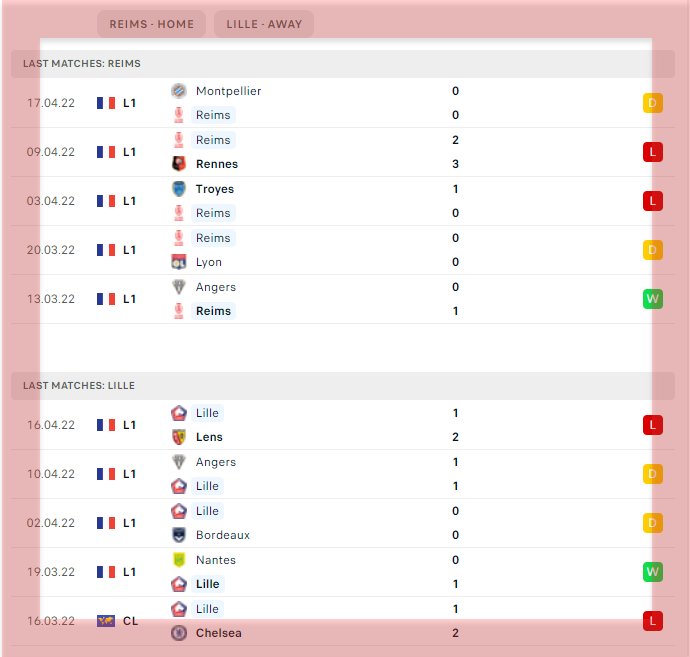