Real Valladolid vs Huesca – Real Valladolid and Huesca will meet in the last round of LaLiga 2 this Sunday, with the automatic promotion hopefuls taking on the mid-table side. This Sunday, at Estadio José Zorrilla, the two sides will square off.

At the top of the table, Real Valladolid has 78 points after 41 games. In the league, they won 23 times and drew and lost nine times each. Just two points separate Eibar and Almeria, who occupy the top and bottom spots in the table.

The Playoff promotion is presently being dominated by Valladolid. After a 2-1 victory over Ibiza in La Liga 2, the hosts are confident of a repeat performance.

Valladolid has scored in all six of its games in a row, so they’ve had no trouble finding the back of the net recently. They’ve racked up a total of 10 points and only given up five throughout that time.

Huesca, on the other hand, sits in 11th place with 54 points. In 41 games, the team won 13 and drew 15 of them, while losing on 13 of them. On Sunday night, the visitors will have nothing to play for in a dead rubber match; they have no chance of promotion and have no chance of relegation.

Huesca enters the clash on the back of a 3-2 league victory over Real Sociedad B. They have been beaten in five of their past six matches, allowing seven goals to be scored by the opposition. They’re definitely lacking at the back end.

Huesca scored six goals in its last two h2h victories. Huesca has won three of their past six games against Real Valladolid, while the latter has triumphed twice. In their last three league games, both teams have scored.

As of this writing, Real Valladolid has won 13 of its last 20 home games, good enough for third place in the Spanish league. They’ve also won three league games in a row. Meanwhile, Huesca has not won away from home in the league in the last three games and has lost two in a row in that time.

However, they have a 2-0 lead in the most recent meetings. We expect a victory at home on Sunday, given the team’s present form and their sincere desire to gain promotion. 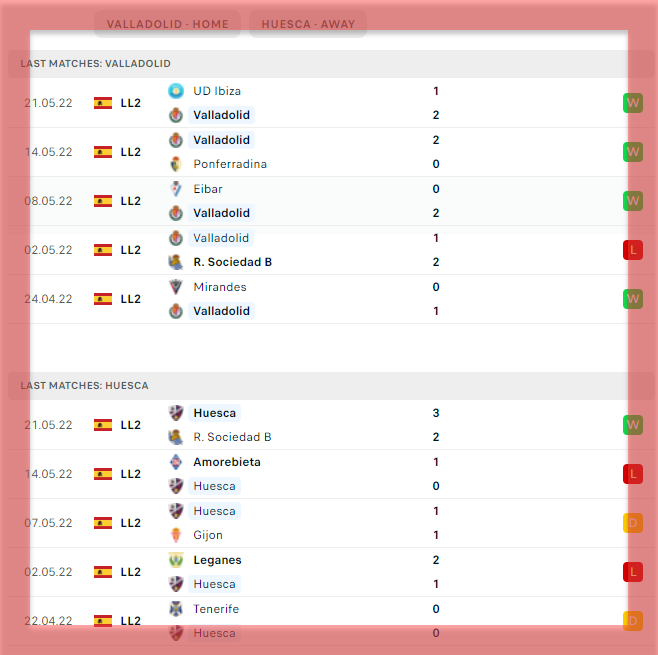