Real Sociedad vs Real Betis – On Sunday evening, Real Sociedad and Real Betis will face off in the 12th round of La Liga after their midweek UEFA Europa League commitments.

There will be a great deal at stake this weekend at Reale Arena because the two teams are only separated by two points in fourth and fifth place in the league rankings.

Real Sociedad’s eight-game winning streak in all competitions came to an end on Saturday as they lost 1-0 away to Valladolid. Last weekend, they attempted 20 shots at Estadio Jose Zorrilla, but just two were successful.

Additionally, it was Sociedad’s third of its last four league games that ended with a 1-0 result. A similar outcome this time around against Real Betis, who have one of the best defensive records in La Liga, would not surprise us.

In eleven league games this season, Los Beticos only allowed eight goals to be scored. They have, however, been in somewhat of a crisis lately, having won just one of the past five league games.

The most recent blunder for Manuel Pellegrini’s team occurred last Sunday when they lost 1-2 to Atletico Madrid at home. Los Beticos have been shut out in three straight away games despite playing teams like Celta Vigo, Valladolid, and Cadiz.

In the previous 25 trips to Donostia-San Sebastian, Real Betis was only able to defeat Real Sociedad three times. These teams’ previous head-to-head encounter resulted in a scoreless draw.

Sociedad’s previous four league games all finished in 1-0 victories, while Real Betis went three games without scoring in a row on the road in La Liga.

At 5.00 odds, we think there is value in taking the draw at the half and at the finish of the game. However, you can also choose 1-1 as the right score option at 6.50 odds. 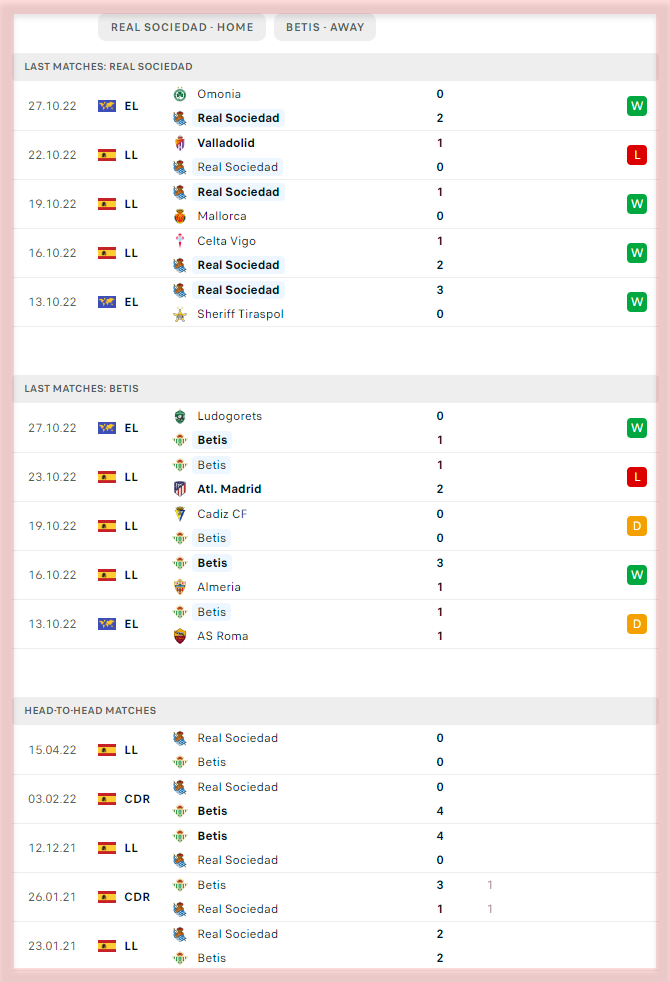