With goals from Alexander Isak and Martin Zubimendi, the Basques have displayed strength and superb team cohesion to overturn a deficit and turn the game around in the second half.

Real Sociedad had already defeated relegation-threatened Cadiz 3-0 at Reale Arena, and this was their second consecutive triumph.
Can Imanol Alguacil’s team complete the season on a high note and win their third consecutive match on Sunday evening when they play Atletico Madrid in the final La Liga encounter of the season?

With two victories and a tie in their previous four matches, Atletico Madrid has already qualified for the UEFA Champions League.
They only have third place to defend tonight, one point ahead of fourth-placed Sevilla, but in the larger scheme of things, the outcome of this match in San Sebastian will have no bearing on their fortunes.

For what it’s worth, Diego Simeone’s team hasn’t been particularly offensive recently. In their past five games, they have only scored four goals.
Only one of Atleti’s previous nine games in all competitions resulted in three or more goals.

This will be the third meeting between these two sides this season, and Atletico Madrid has yet to defeat Real Sociedad.
When the two teams met in the Copa del Rey R16 clash at Reale Arena in January, Sociedad came out on top 2-0.

Only two of the previous eight meetings between these two teams have produced three or more goals.

This should be a competitive match, but we can’t help but think Real Sociedad are the favorites. They’re playing in their own stadium, where they’ve only lost 8 of their previous 25 meetings with Atletico Madrid.

The hosts will obviously be on a high following their great win in Villarreal, and we believe there is value in backing them at 2.70 odds. 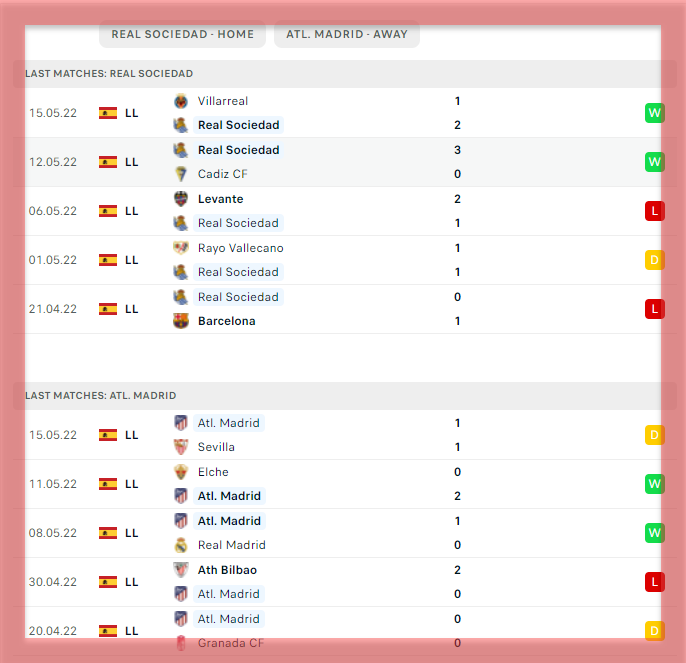