Real Sociedad B vs Real Zaragoza – Preview, and Prediction

Real Sociedad B vs Real Zaragoza – Real Sociedad B has had a terrible season, and their relegation has been guaranteed after back-to-back defeats, the most recent of which was a 3-2 setback to Huesca. Xabi Alonso’s team has struggled defensively throughout the season, conceding 59 goals in 41 games, 30 of which have come at Campo José Luis Orbegozo. Indeed, at least three goals have been scored in eight of their past ten games, including five of their last six at home, with both teams scoring in each of those games and Sociedad claiming only two victories.

Real Zaragoza might move into the top half of the table with a win in their final game of the season, but they have only won one of their last eleven away games. Six of those games have seen at least three goals, including a 3-3 tie with Real Oviedo earlier this month, and they have only kept two clean sheets out of 20 tries on the road.

This season, Juan Ignacio Martnez’s team has only conceded 45 goals, although 66.6 percent of those have come away from home, while they have also scored 21 goals.

I believe this game will include three or more goals and will be highly entertaining, with Real Sociedad B winning 2-1 as my correct score prediction. Real Sociedad B will say their goodbyes to Spanish football’s second tier on Friday night when they face Real Zaragoza in the final round of the season in Segunda Division.

With a 3-2 defeat over Huesca on Saturday, the youth Sociedad team lost all hope of retaining their second-tier status. In the second half, Xabi Alonso’s team tried to erase a two-goal deficit, but they were unable to get the winning goal that would have maintained them in the quest for survival. Instead, they conceded a counter-attack goal en route to a 3-2 defeat at Estadio El Alcoraz. 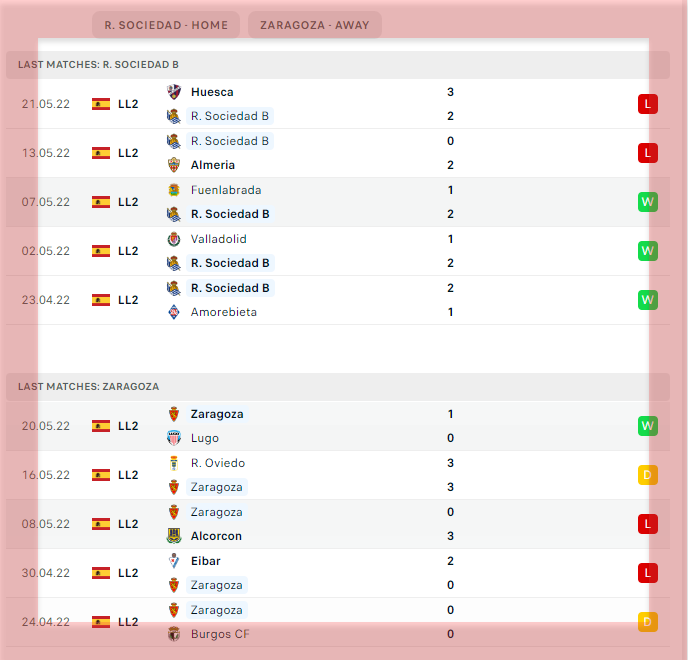