Real Salt Lake vs FC Dallas – This week kicks off Gameweek 22 of Major League Soccer with Real Salt Lake hosting FC Dallas. Both teams are members of the Western Conference and will be competing for the win at Rio Tinto Stadium on Sunday.

With 33 points after 21 games, Real Salt Lake is in third place. They have a 9–2 record in the league, with one tie and two losses. The home team is still within the top seven and in playoff position in the Western Conference, although they are a bit further away from the top two slots.

Following a 3-0 MLS victory over Sporting Kansas City, the home team will be hoping for a repeat performance. With 10 goals scored over their last 6 games, Pablo Mastroeni’s squad has a goals-per-game average of 1.67.

FC Dallas, on the other hand, has 29 points and is currently in sixth place. In the league, they went 7-7, with 7 wins, 8 ties, and 6 losses in 21 matches played. They have lost 11 straight MLS matches, all by a margin of two goals or more.

The road team tied Austin FC 1-1 in a league matchup in their most recent outing. Over the course of their last six games, they’ve let up 10 goals. There is a serious need for the team to focus on their defence.

In their last 10 MLS home games, Real Salt Lake has yet to taste loss. They remain the only undefeated home team in the league. The team has also won their last two home games against rivals.

On the other hand, FC Dallas hasn’t been doing so hot lately, as evidenced by the fact that they’ve won just four of their last twenty-seven league away games. They’ve gone winless in their last seven league games. 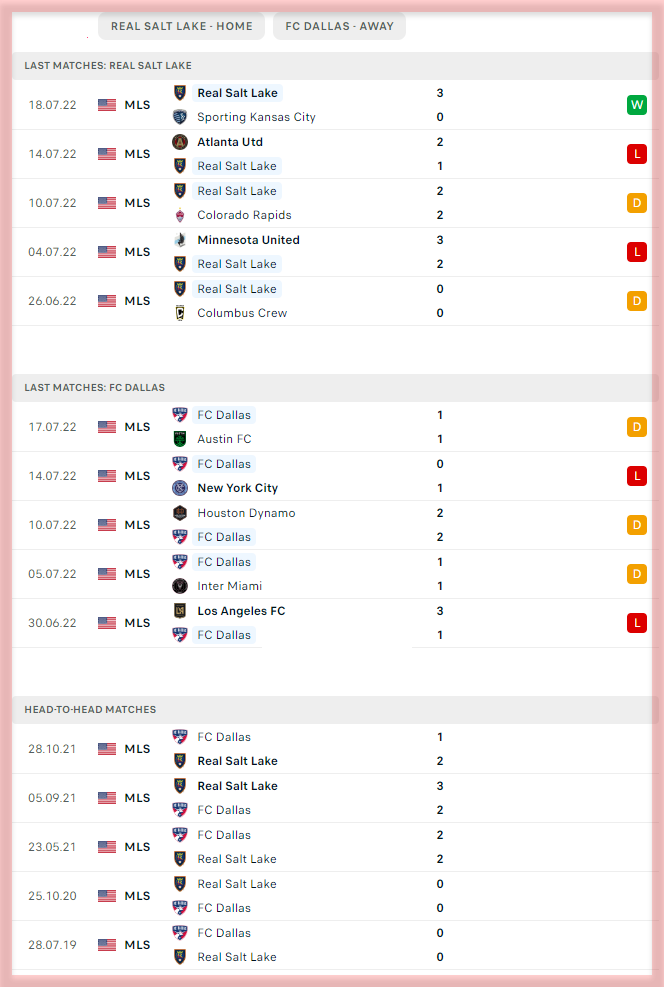