Real Madrid vs Levante – Real Madrid made changes in a 1-0 loss to city rivals Atlético Madrid, having already won a record-extending 35th La Liga title. Real Madrid may face a depleted team today, but manager Carlo Ancelotti will be wary of losing consecutive league games for the first time since May 2019.
They will need to be at their best after just winning a third of their matches against Levante in 2017/18. (W3, D3, L3).

Two of those three losses came at the Santiago Bernabéu, where Madrid has won five of its past six LL home games and kept a league-high 53 percent clean sheet average.
After a difficult season, Levante face relegation if they fail to win today and Granada beat Athletic Bilbao. They are the only LL side to beat Madrid after losing the first goal and now have a chance to win both H2H meetings for the second time in the competition.

The ‘Frogs’ have scooped up four points from their last two travels, including their greatest away LL win of the season, and fans can expect more tenacious resistance from a Levante team that has won 21 of their 29 points this calendar year. Eduardo Camavinga’s three LL goal involvements (G2, A1) have all occurred in home wins with Madrid scoring 4+ goals. Roger Mart has scored four of Levante’s previous five LL goals, including one in the opposite H2H ,Madrid has been shown the first card in 15 of its past 18 LL games. 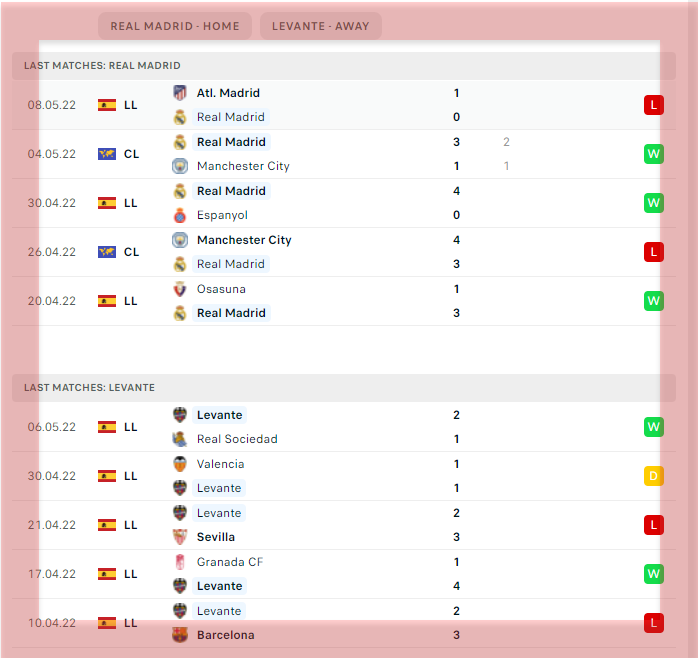