Real Madrid vs Girona – The Los Blancos are still by far and away the best team in Spain. They are well in charge of the top slot, and this Sunday they will be the favourites to defeat the Girona team that faces relegation.

With only two victories so far this season, Girona is ranked 18th out of 20 teams. They have had one of the poorest defences in the entire Spanish top flight and are one of the very few clubs to have gone winless in their last five league games.

They have also been among the road teams with the worst performances. With the exception of one tie, they had a 100% losing record in these games, and it should be noted that no other team scored fewer points from away games than they did.

The Royal Whites are taking advantage of their time as Spain’s sole rulers in the meantime. Carlo Ancelotti’s team believes that this is the perfect moment to pursue another league championship because Barcelona and Atleti are both mired in problems.

They lost their first game of the season in any competition, but they are at home this weekend. Even though they were in complete command of their Champions League group, Los Blancos dropped their most recent game.

They will undoubtedly be motivated to atone for their transgressions, and this forthcoming match seems like the perfect chance. They are playing one of the poorest teams in La Liga at home.

In the last ten years, three goals or more have been scored in 100% of matches. In four of the previous five games, Madrid scored three or more goals, 18 goals were scored in total throughout the previous three games played here. In the most recent game played here, the visitors prevailed 1-2.

Except for one tie, the Los Blancos enjoy a perfect home record in La Liga this year. They have consistently scored a tonne of goals and, as a result of these outcomes, have gained a tonne of momentum.

Girona, on the other side, is in the relegation zone and must travel to the Santiago Bernabeu, which will only make matters worse. Additionally, they have a dismal all-time record versus their rival. This weekend at home, Real Madrid is predicted to triumph. 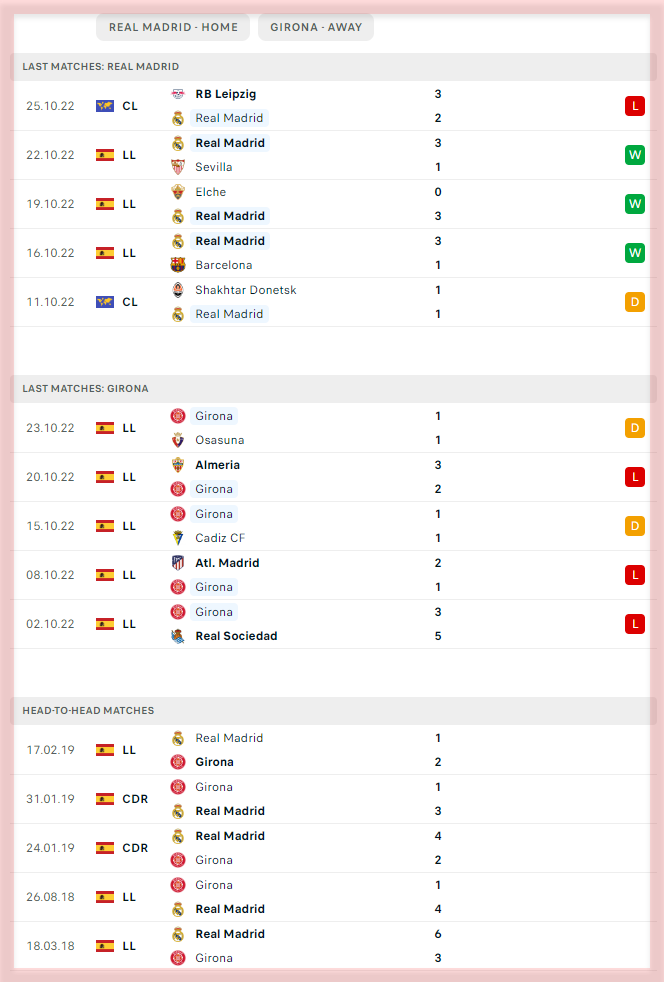