Real Madrid vs Atl. Madrid – Real Madrid will be hoping for a repeat of their previous performance after defeating Athletic Bilbao 0-2 in La Liga.

Real Madrid enjoyed 50% of the game’s possession and 2 of its 10 shots on goal were successful. Toni Kroos (90′) and Karim Benzema (24′) scored goals for Real Madrid. Three of Athletic Bilbao’s 18 efforts on goal were on target.

Real Madrid has scored goals in each of their previous six games, continuing a streak in which they have done it consistently. During that time, they have scored nine goals overall while having eight goals scored against them.

In their last game, Atlético Madrid defeated Real Valladolid by a score of 3-0 to advance to this match.

Atlético Madrid had 47% of the possession in that game and three of their 18 efforts on goal were successful. Lvaro Morata (18′), Antoine Griezmann (23′), and Mario Hermoso (28′) scored goals for Atlético Madrid. One of Real Valladolid’s seven shots on goal was successful.

There have been relatively few goals scored between Atlético Madrid and their opponents in 5 of the last 6 games. The overall average of goals scored each game throughout that stretch is a pitiful 2, with Atleti scoring an average of 1.67. That pattern won’t necessarily continue in this game, though.

Reviewing their previous head-to-head matches dating back to 01/02/2020, we can see that Real Madrid has won 4 of them, Atlético Madrid has won 1, and there have been 1 ties.

During those matches, the two teams combined to score 11 goals, 8 of which came from Los Blancos and 3 from Atleti. That equals 1.83 goals per game on average.

Atlético Madrid had a 53% possession advantage and made 12 efforts on goal, scoring just once. Mario Hermoso (83′) was their lone scorer.

Two of Real Madrid’s six shots on goal were on target. Federico Valverde (36′) and Rodrygo (18′) both scored. José Luis Munuera Montero served as the referee for the contest.

In the end, Real Madrid will probably score and may even retain a clean sheet, thus Atlético Madrid may not find it easy to score goals against this Real Madrid team. 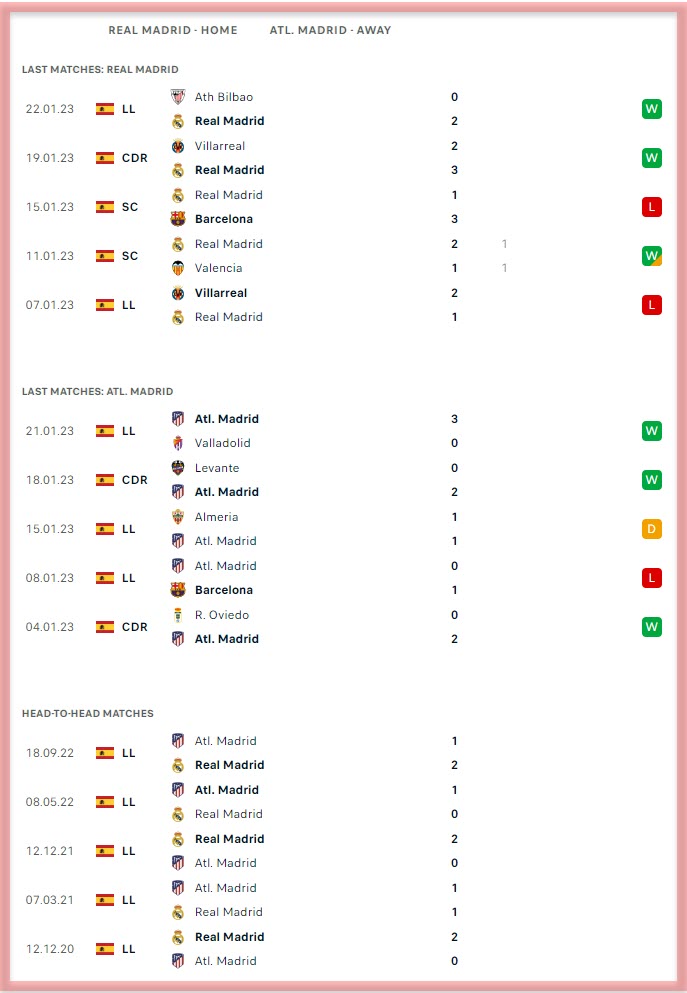