Real Betis vs Osasuna – Real Betis will strive to keep pace with Barcelona and Atletico Madrid with a win over mid-table Osasuna tomorrow afternoon at Estadio Benito Villamarin to stay in contention for a top-four finish.

Los Beticos are now four points behind Barcelona and Atletico Madrid, who are tied for third place in the league table.

The team led by Chilean manager Manuel Pellegrini, on the other hand, has had a bit of a slump in form in recent months.

They’ve only won one of their last five home games in all competitions. Moving ahead, they did not look well in the goalless draw against Celta Vigo in the previous round.

At Abanca-Balaidos two weeks ago, Betis barely managed a single attempt on goal. Three or more goals were not scored in each of their last three games across all competitions.

On the other hand, Osasuna is having a good season in La Liga this season. They’ve defied pre-season predictions and are now in the hunt for a top-half finish.

Two of the last three league games have been won by Arrasate’s team. On the previous Matchday, they put forth a strong effort in an easy and comprehensive 3-1 victory over Levante.

In the previous four league away matches, Osasuna had won two and lost two. Real Sociedad and Barcelona were among the teams to suffer defeats, but we don’t have to consider them major setbacks.

Real Betis will stick to tradition, since they have always been the dominant force in this encounter.

Osasuna will be in better spirits going into this match, although they have historically failed to break down Betis in their head-to-head meetings.

We think the Under 2.5 goals FT bet at 1.80 is a good bet, and we can’t ignore the 1.85 odds on the home victory bet, given that Betis has won seven of the last eight H2H meetings. 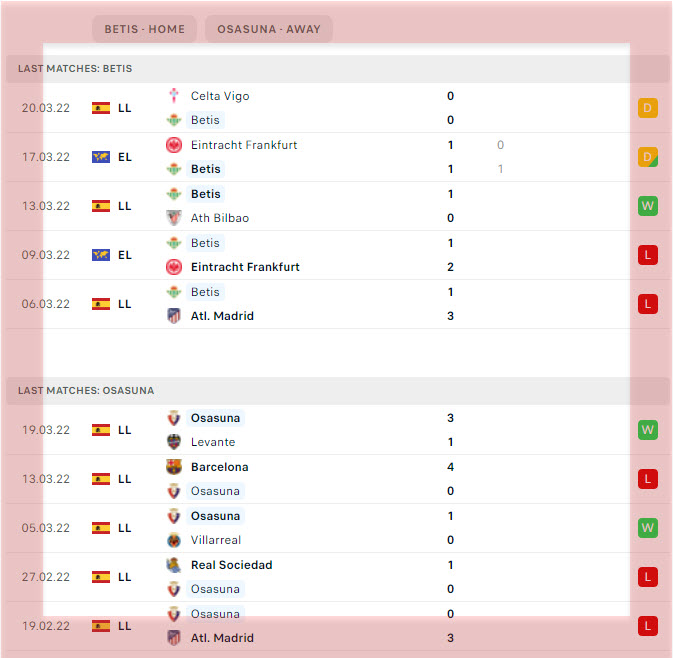