Reading vs Stoke City –  Reading will be hoping for a better outcome after their most recent encounter against Sheffield United, a 4-0 Championship loss.

Reading had 43% of the possession in that game, but only managed 5 shots on goal, none of which were successful. Seven of Sheffield United’s 18 shots on goal were on target.

For Sheffield United, goals were scored by Oli McBurnie (11′), Anel Ahmedhodi (46′, 81′), and Iliman Ndiaye (62′). The large percentage of scores with a nil in them is a recurring characteristic of recent Reading games.

A wager on both teams scoring in their prior six meetings would have lost in five of those matches. However, there is no guarantee that this pattern will continue into the subsequent game.

Reading had won all three of their previous league home games going into this matchup. In their previous match, Stoke City and Swansea City played to a 1-1 draw in the Championship.

In that game, Stoke City had 49% of the possession and made 20 attempts on goal, four of which were successful. Tyrese Campbell scored for Stoke City in the 91st second.

Swansea City had 10 tries at goal at the other end, with 5 of them being successful. Swansea City’s Jol Piroe scored in the sixth minute. Stoke City, under the leadership of Alex Neil, have scored five goals in their last six games, averaging 0.83 goals scored per game.

Reading and Stoke City have split their previous head-to-head meetings dating back to the 14th of December 2019 with three matches ending in draws.

Over the course of those games, the two clubs combined for 13 goals, with 5 coming from The Royals and 8 from The Potters. That equals 2.17 goals per game on average.

Paul Ince, the manager of Reading, has no reservations about his players’ fitness going into this match because they are all injury-free and prepared to play.

There is only one fitness issue among a group that is generally in good health that Stoke City manager Alex Neil has to be concerned about. Harry Souttar is unable to play in this match due to a cruciate ligament rupture. 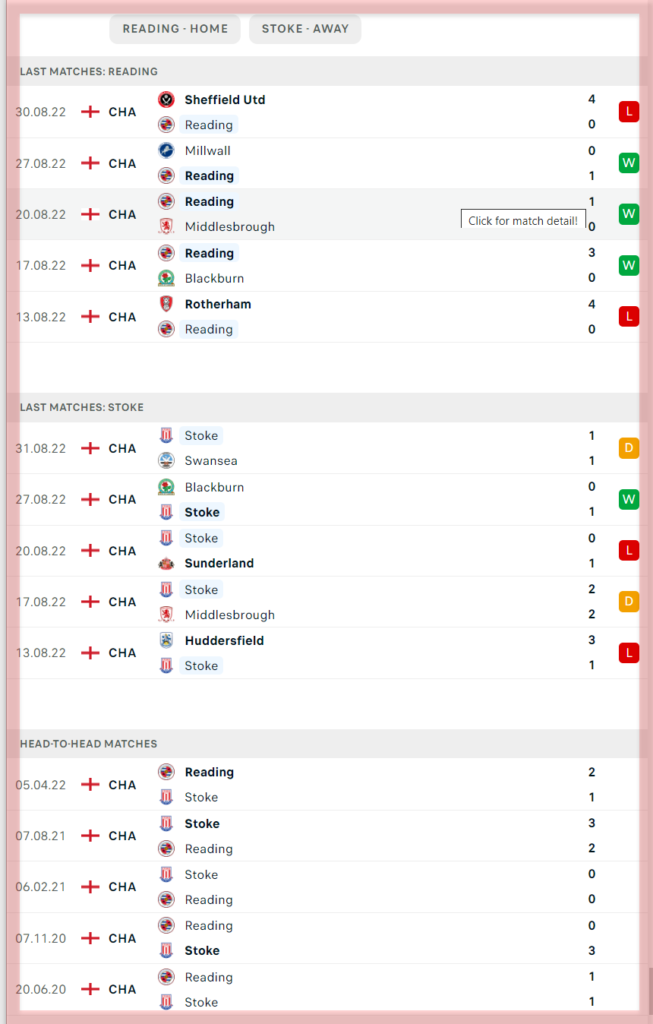