Reading vs Stevenage – Preview and Prediction

Reading vs Stevenage –  When Reading welcomes Stevenage to the Select Car Leasing Stadium on Tuesday, a spot in the EFL Cup’s next round is at stake.

Both sides will be aiming to build on their respective successes from their most recent games as they enter this one. In their matchup on Saturday afternoon, Reading defeated Cardiff City by a score of 2-1 to begin their league campaign.

Callum O’Dowda’s early strike put Paul Ince’s team down until goals from Shane Long and Tom Ince in either half turned the game around.

The Royals are now tenth in the Championship with three points from their first two games this season, three points behind league leaders Blackburn Rovers.

The next challenge comes from a team that has only won one of the previous five meetings between the teams in all competitions.

The hosts on Tuesday will enter the game with confidence after recording their first competitive home victory since April.

Stevenage defeated Stockport County 2-1 at the Broadhall Way on Saturday to keep their perfect record in the new season intact.

Just before the hour mark, Callum Camps’ goal put Steve Evans’ team behind, but late goals from Luke Norris and Jamie Reid changed the course of the match.

As a result, the Boro are currently ranked fifth in League Two, however they are only behind current leaders Walsall on goal differential.

The visitors on Tuesday have shown they are a tough nut to crack away from home, as they have four victories and the same number of clean sheets in their previous six away games.

Jamie Reid might get a start after serving as a substitute for Stevenage the last time around and doing a nice job. Elliott List missed the away team’s triumph over Stockport on Saturday,

and the midfielder is a serious question mark for the game on Tuesday. Shane Long scored on his full debut for Reading, and the Irishman is anticipated to captain the team once more in this contest.

Sam Hutchinson, 33, will likely miss his third straight game as he continues to struggle with a hamstring issue. Reading will be expected to take the initiative and challenge Stevenage because they are playing in front of their supporters. Our prediction is for the home team to win, albeit by a slim margin

Reading vs Stevenage – Head -to- Head 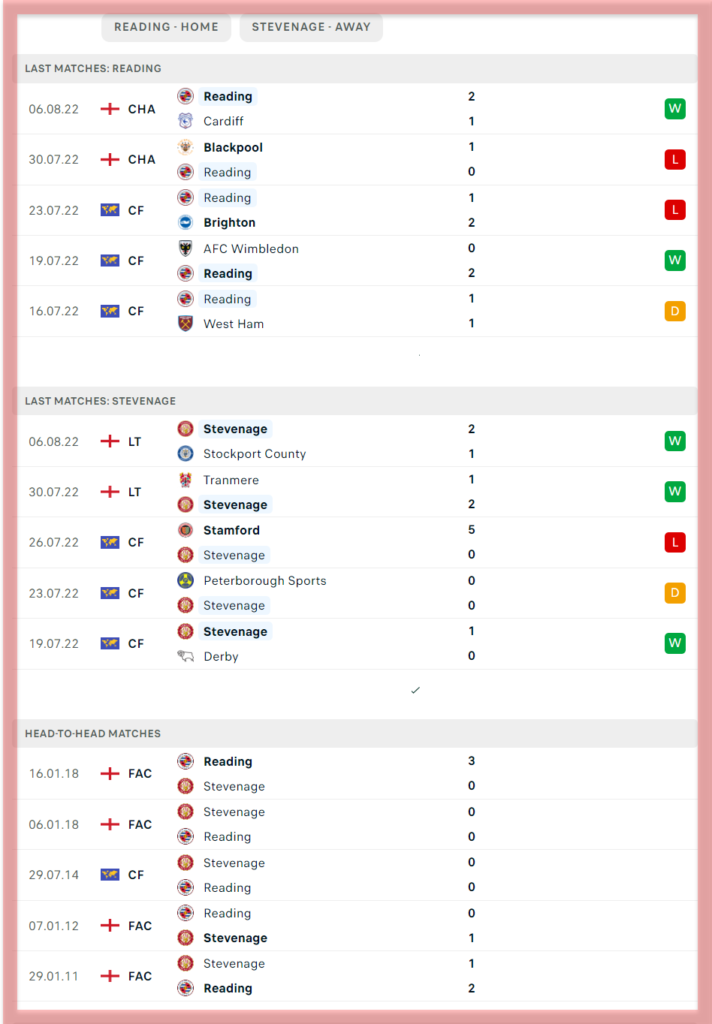