Rayo Vallecano vs Villarreal –  Rayo Vallecano’s unbeaten run in La Liga (W2, D2) since September has not only ensured their survival, but Andoni Iraola’s side are still on course for their best season since 2012/13. (eighth). After a dull 0-0 draw away to relegation candidates Getafe, Iraola exhorted his team to “keep competing”.

With their near-certain survival built on a foundation of bullying the competition’s weaker teams at the Estadio de Vallecas, Vallecano have often been able to match but not conquer. They have a dismal LL home record versus teams in the top half of the rankings (W1, D4, L4), scoring just one goal in nine games.

Villarreal lost a “decisive” home match against Sevilla (1-1) and now Unai Emery’s greatest fears have come true. His team must beat Barcelona and Real Sociedad in the final two weeks or lose out on European football for the first time since 2014/15.

It is likely that Villarreal’s poor road performance contributed to their second-worst LL result in the recent decade. The ‘Yellow Submarine’ have now lost four of their previous five LL openers as favourites, all against lower-ranked clubs. During that streak, they only scored once before halftime, against Getafe in April.

Watch out for Sergi Guardiola, who has scored in each of Vallecano’s last ten LL home games. Along with injured Gerard Moreno, Villarreal’s Samuel Chukwueze is one of two players to score in two LL away games since September. Vallecano’s past nine LL games have been tied or won by one goal. 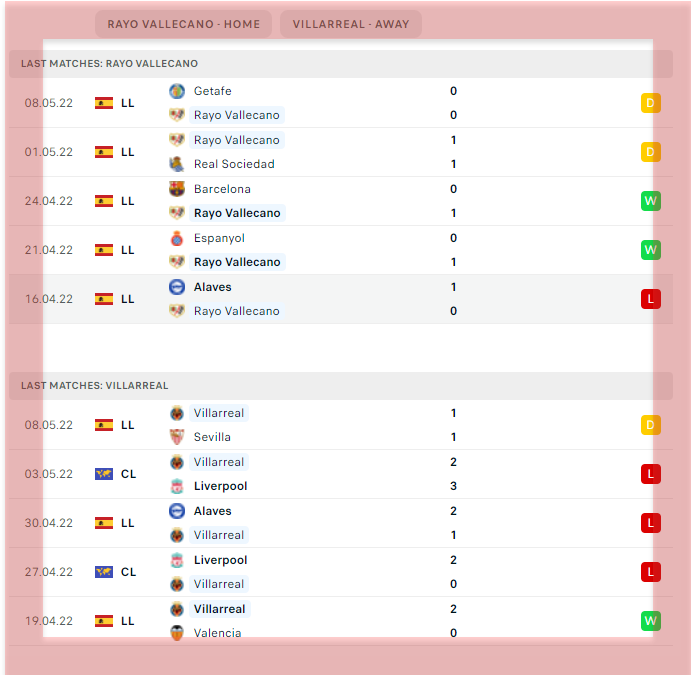