Rangers vs RB Leipzig – On Thursday, all eyes will be on the Europa League semi-final between Rangers and RB Leipzig. Both teams have made it thus far, and the winning team will get to play in the competition’s final.

Rangers haven’t played for 90 minutes in a long time. Rangers have been scored against in 5 of their last 6 games, allowing 5 goals.

RB Leipzig’s defenders have now conceded 3 goals in their past 6 matches. During the same time frame, their forwards scored 10. That pattern won’t necessarily be sustained in this match, however.

Due to an otherwise accessible group of players, RB Leipzig coach Domenico Tedesco just has one fitness concern. Amadou Haidara (Medial Collateral Ligament Injury) misses out on this game.

Rangers will need to put up a great effort to score goals against this RB Leipzig team, who we predict will score and stay on top. So we predict a hard-fought 0-1 win for RB Leipzig after 90 minutes.

Rangers and RB Leipzig met for the first time in the first leg, and now the Scottish side will welcome their German rivals. They haven’t beaten a German team at home since beating Werder Bremen in March 2008 (D1 L2).

So far, RB Leipzig have lost all three meetings against Scottish opponents, with the only win coming against Celtic in the UEFA Champions League group stages in 2018-19.

Rangers haven’t hosted a major UEFA European semi-final since April 2008, when they hosted Fiorentina in the UEFA Cup; they’ve reached the final in four of their previous five semi-final appearances (1961, 1967, 1972 Cup Winners’ Cup, and 2008 UEFA Cup).

James Tavernier (5) of Rangers has scored the most home goals in the UEFA Europa League this season, netting a penalty in each of his previous three games at Ibrox. His penalty goal in this encounter would be the first in the competition’s history. 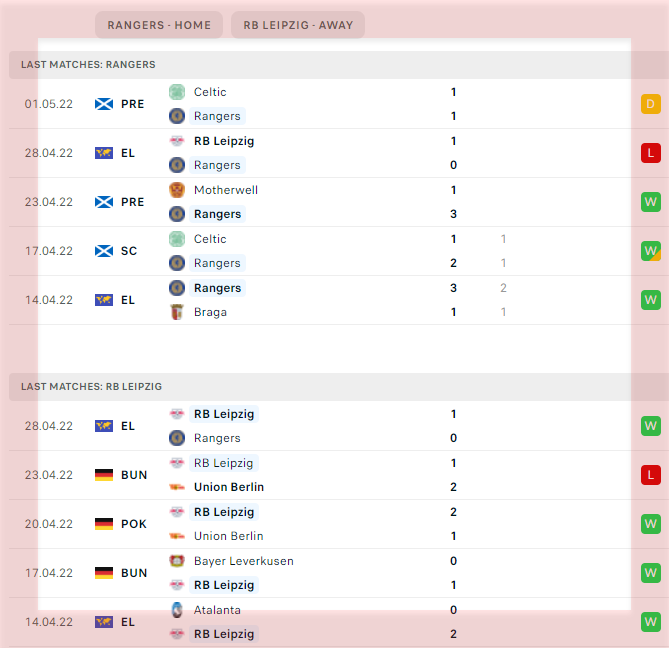