Rangers vs Dortmund – preview and prediction – team news, and lineups

Rangers vs Dortmund – Rangers will welcome Borussia Dortmund to Ibrox on Thursday night for their eagerly-anticipated second-leg match in the Europa League knockout round, following a dramatic 4-2 triumph in the first leg.

The Gers presently have a two-goal lead, but they will be aware of the threat that the visitors will provide, as the Germans arrive in Glasgow fresh off a 6-0 Bundesliga triumph over Borussia Monchengladbach last weekend.

Rangers were in the fourth tier of Scottish football in 2013, and Dortmund were in the Champions League final at the same time.

After nine years, Gers fans were treated to a remarkable performance from Giovanni van Bronckhorst’s side last week, when they stunned everyone by sweeping aside the German giants to take control of the playoff tie.

For the visitors, James Tavernier, Alfredo Morelos, and John Lundstram all scored, and Dan-Axel Zagadou’s own goal added a fourth, but second-half goals from Jude Bellingham and Raphael Guerreiro have given Dortmund a fighting chance of a recovery.

As previously stated, Borussia Dortmund bounced back from their 4-2 loss to Rangers with a 6-0 win over Monchengladbach at home last weekend, their greatest win in any competition since September 2018.

Dortmund, who are now in second place in the Bundesliga, six points behind leaders Bayern Munich, have now won and lost in each of their previous seven games, an inconsistency that head coach Marco Rose will be eager to correct.

Aaron Ramsey and Leon Balogun are both doubtful with minor injuries and will be checked before the game, while Ianis Hagi has been ruled out for the season with a knee injury.

Despite the fact that backup goalkeeper Jon McLaughlin missed last weekend’s stalemate at Dundee United due to a sickness, Allan McGregor, 40, is poised to continue in goal.

Amad Diallo, on loan from Manchester United, has started three of Rangers’ past four games as a substitute, and the 19-year-old winger may have to settle for a bench spot again in midweek, with Ryan Kent and Scott Arfield expected to stay on the flanks and Morelos set to lead the line upfront.

Borna Barisic was benched last weekend, but the Croatian left-back could replace Calvin Bassey in the back four, alongside Tavernier, Connor Goldson, and Filip Helander.

Manuel Akanji (calf), Dan-Axel Zagadou (thigh), Mateu Morey, and Marcel Schmelzer (both knee) are all out of Borussia Dortmund’s match on Thursday due to injury.

Giovanni Reyna, whose father Claudio Reyna played for Rangers from 1999 to 2001, was taken off in tears after half an hour against Monchengladbach; nevertheless, his muscular injury is not as bad as first thought, and he will miss the trip to Glasgow.

With groin and muscular ailments, star attacker Erling Braut Haaland and full-back Thomas Meunier are both uncertain; however, the former has completed full training and could go to Ibrox with the rest of the squad.

Rose started with a four-man defense in the first leg, but he may start with three at the back on Thursday, with Marin Pongracic joining Mats Hummels and Emre Can at center-back, as he did last weekend.

Julian Brandt might replace Reyna in the starting XI, starting with Reus in advanced midfield behind lone striker Donyell Malen, who scored last weekend to end an eight-game goal drought in all events. 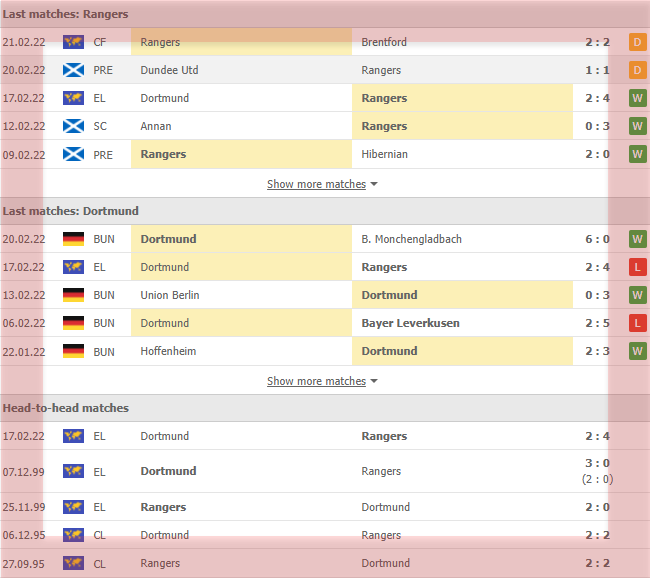