QPR vs Blackpool – preview and prediction – team news, and lineups

QPR vs Blackpool – On Wednesday evening, Queens Park Rangers welcome Blackpool in a bid to stop a four-match losing streak in the Championship.

While the hosts have managed to stay in fourth place in the table, Blackpool have dropped to 15th place after failing to win in their last three games.

After a run of five wins in six league appearances heading into February, QPR appeared to be the dark horses for automatic promotion.

However, that was followed by a four-game losing streak, three of which were against teams in the lower half of the standings.

The most recent of those defeats came on Saturday, when Mark Warburton’s side were held to a 1-1 draw by Hull City, with Ilias Chair scoring a late equalizer.

Blackpool still has a slim chance of making the playoffs, but aiming for a top-10 finish is a more realistic goal.

That is especially true after a three-game winless streak, though Neil Critchley will be content with Saturday’s 1-1 draw at in-form Cardiff City.

With 14 games remaining, the Seasiders have a 21-point lead over the bottom three, a dream scenario in their first season back in the second division.

However, Critchley will continue to demand more from a bunch of players who will feel like they are part of Critchley’s plans for next season, which will be more focused on a playoff run.

Dion Sanderson, on loan from Wolverhampton Wanderers, is expected to keep his place in the QPR back three with Rob Dickie still serving a suspension.

Stefan Johansen might return to the midfield to replace either Sam Field or Jeff Hendrick, with Moses Odubajo perhaps returning to the left wing-back position.

Blackpool’s injury list is one of the longest in the division, giving Critchley with few options for tinkering with his starting lineup.

CJ Hamilton may replace Charlie Kirk on the left side, while Lavery might be drafted ahead of Yates or Gary Madine. No player in either squad is facing a two-match suspension after accumulating 10 yellow cards. 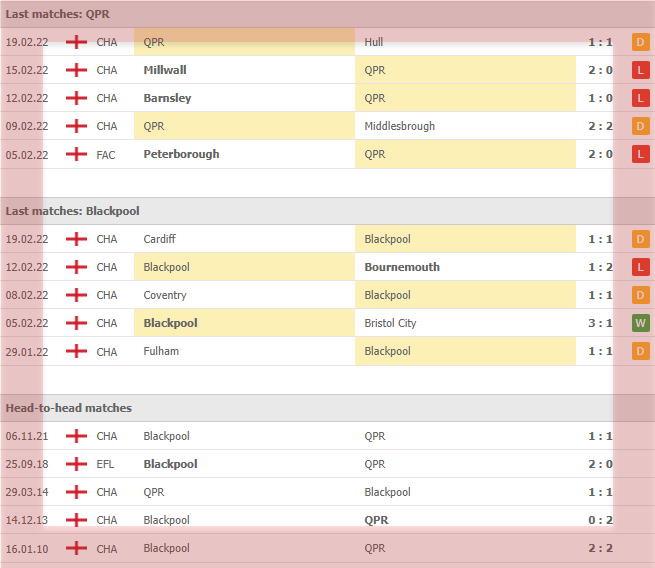