Qatar vs Senegal – After losing to Ecuador 0-2 in their previous World Cup match, Qatar will be looking to avenge that lost on Friday.

Qatar had 47% of the game’s possession and made 5 shots on goal, but none of them were successful. Ecuador made 6 efforts at goal, scoring twice. Ecuador scored two goals in the 16th and 31st seconds.

Over their previous six games, Qatar has scored eight goals. In contrast, in those same games, they have been the victim of five goals on the other end.

Senegal and their traveling supporters will be looking for a better outcome in this match after losing their previous World Cup match against Netherlands.

Senegal had 47% of the game’s possession and 15 shots on goal, but none of them were successful. The Netherlands had 10 shots on goal at the other end, with 2 of them going in. Dutch goals were scored by Cody Gakpo (84′) and Davy Klaassen (99′).

The Senegal defense has put up a string of diligent performances, lowering their overall “goals against” total to 3 from their last 6 games. Their own forwards have managed to score seven goals in that time.

To score against this Senegal team, which is expected to score and potentially hold a clean sheet as well, Qatar may find themselves up against it.

Because of this, we expect a very close game that will end with Senegal leading 0-1 after 90 minutes.

According to the current betting odds on the 90-minute outcome market, you can get 5.8 for backing Qatar, 3.74 for a draw, and 1.63 for betting on Senegal winning. They represent the best market prices that are now attainable. 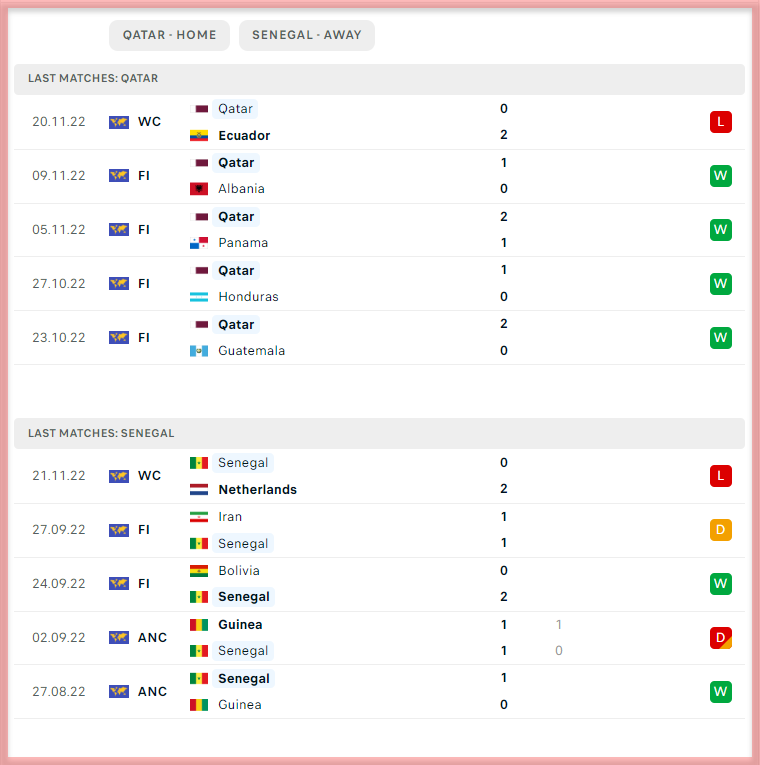