Qarabag FK vs Lech Poznan – Qarabag’s most recent attempt to qualify for the Champions League group stage for the second time ended in a 1-0 loss last Tuesday, maybe regretting their inability to build on a strong first-half performance in Poland.

Qarabag were the first Azeri team to advance to the group stage of Europe’s premier competition back in 2017. They had previously competed in 18 UEFA competitions, including seven times in the Champions League, thirteen times in the UEFA Cup or Europa League, and two times in the Cup Winners’ Cup.

Long-time head coach Gurban Gurbanov, who guided his team to the semifinals of the Europa Conference League last season, must now arrange a victory at home if they are to continue their quest to duplicate that accomplishment.

Last season, Qarabag, who had previously missed out on winning the championship for the first time in eight years, regained first place in the Azerbaijan Premier League and will host Poznan as the national champions.

The Horsemen, who also completed a hat trick by winning the cup in May, are without a doubt the best in their home country, but they now aim to compete against the best in Europe.

Lech Poznan’s victory over Qarabag on last Tuesday gives the Polish champions a good chance to go to the second qualifying round of the Champions League, which would have been cause for concern after the team’s two losses in three warm-up games.

Due to the unfavourable time of the match, the Dutch coach made numerous changes to his starting XI as Lech fell to Rakow 2-0 on Saturday in the Polish Super Cup.

Lech sought to call off the game, suggesting a different date in the middle of November, right before the World Cup, but it went on as scheduled, and they lost to goals scored immediately before and after halftime.

However, Lech are now looking to have an influence on Europe after commemorating the club’s 100th anniversary by winning the Ekstraklasa trophy for the eighth time, under former manager Maciej Skorza.

The Railwaymen have only made four Europa League or UEFA Cup group stage appearances since the turn of the century, with their lone knockout phase qualification in 2011 being cut short at the last-32 stage.

Although they only have a slight lead from the first leg last week, they will undoubtedly bet on their prospects to advance on Tuesday.

Following a somewhat cagey first leg, there may be opportunities at either end because both teams are goal threats and like to take the initiative. The Polish champions should advance, but it might take a last-ditch effort to ensure that they go to the next round of qualification.

Their most recent outcomes highlight the significant efforts made by the Qaraba rearguard. Qaraba have been stingy, as seen by the fact that their last six games have seen a total of three goals scored for them.

The Lech Pozna defence has put up a string of strong performances, lowering their overall ‘goals against’ count to 4 from their last 6 matches. Their own forwards have managed to score 13 goals throughout the same period. However, there’s a chance that tendency won’t continue into this game. 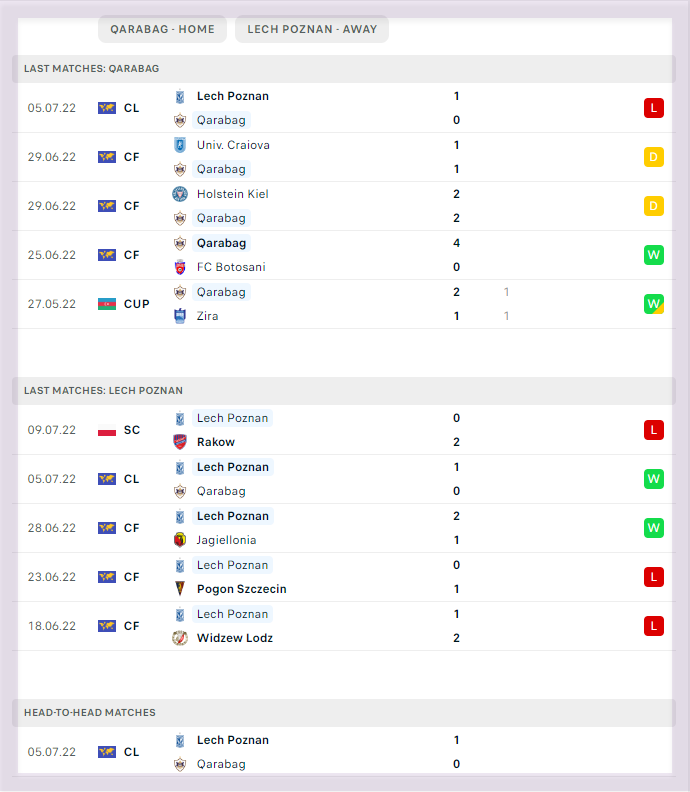