Pyunik vs Basel – Preview, and Predictions

Pyunik vs Basel – The fact that Basel and Pyunik, who currently have the poorest defences in Group H, are still in contention for a place in the knockout rounds is surprising. Since there are just two points separating the two, the group might possibly still be won by either side.

Basel is now ranked second in the table and tied for first place with the leaders in points. With the exception of their loss to the team in first place, they have an undefeated league record of 100%. Additionally, they had the most goals scored in the group.

It should be mentioned that they have an undefeated road record and even scored three goals in their most recent away game. Pyunik, meanwhile, is currently third in the table and can play without feeling any strain.

They have nothing to lose because of this situation. They will be eliminated if they place third, but if they place first or second, they will advance to the knockout rounds.

They will undoubtedly take chances on Thursday at home, and the fervent support of their devoted followers will give them even more confidence.

More of the same is anticipated on Thursday at the Republican Stadium, as was the case in the reverse match between the two clubs.

Basel prevailed 3-1 over the other team in their lone meeting, and in the most of their recent games, Pyunik came out on top and managed to frequently score goals.

Furthermore, it is crucial that they have a flawless home winning record dating back to the third week of August. Be aware that in their last five home games, they have scored 14 goals.

Basel, on the other hand, are not in the best of shape because they are having trouble finding their form. However, they are tied for first place with the top scorers and scored the most goals in the group.

They are capable of pursuing victory on Thursday. A fascinating 90 minutes are to be expected as these two compete to continue their European journey. There is a good chance that a goal will come from either end of the field. 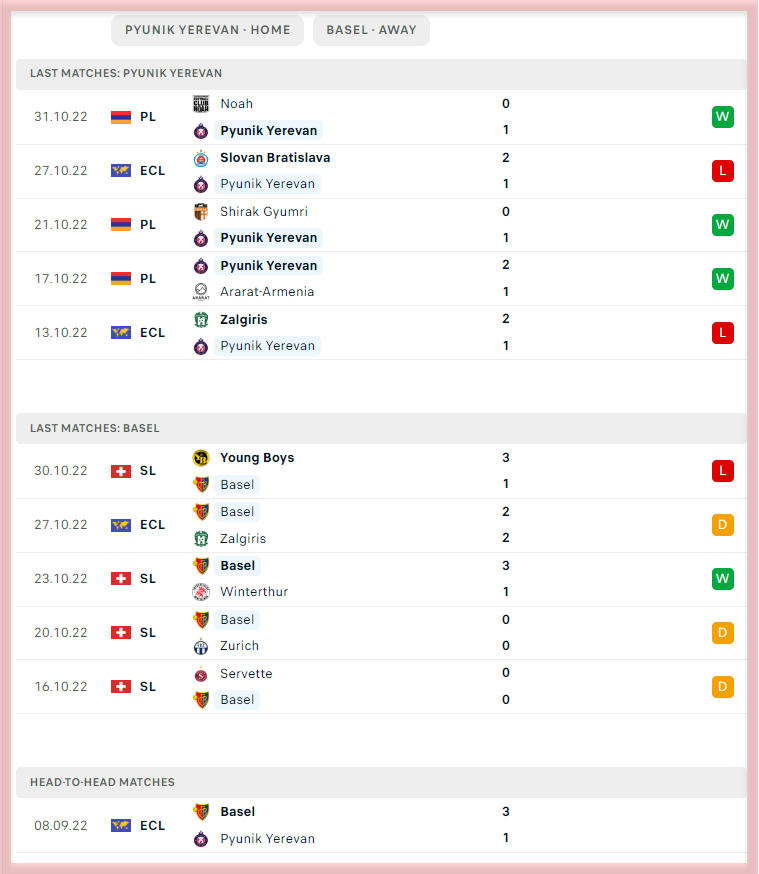