PSV will enjoy their chances of winning this competition, although their unsuccessful attempt to stay in the Europa League before Christmas left them disappointed.

Only needing a point away against Real Sociedad, the Dutch giants were defeated 3-0, ending in a one-point finish in third place.

To their credit, Roger Schmidt and his team won their next six domestic matches, but recent losses to Ajax and AZ have left them five points behind the former, who are the Eredivisie’s frontrunners.

Maccabi Tel Aviv has played 12 matches to gain a position in the playoff round after starting their season in the early qualifying stages.

Their lone setback came at the hands of group winners LASK by a 1-0 scoreline, but newly-appointed head coach Mladen Krstajic will be pleased that the team has European fixtures to play in the second half of the season.

The Yellow Ones have recently moved into third place in Israel’s premier flight after a six-match unbeaten run, although they are still eight points behind the leaders.

Schmidt is expected to make numerous changes to his PSV team for this match, with Marco van Ginkel likely to be one of them.

Eran Zahavi will seek to receive the nod against Israeli opponents, maybe keeping Carlos Vinicius out of the picture, although Ritsu Doan should be featured in a creative area.

Philipp Max and Armando Obispo are both in contention for starts in the back four, at left-back and centre-back, respectively.

After scoring the game-winning goal at the weekend, Jovanovic could receive the nod in the Maccabi attack, and the Serbian could replace Eylon Almog.

If Krstajic wants to incorporate a more defensive-minded player, Sheran Yeini is an option in midfield, but the rest of the lineup might stay the same. 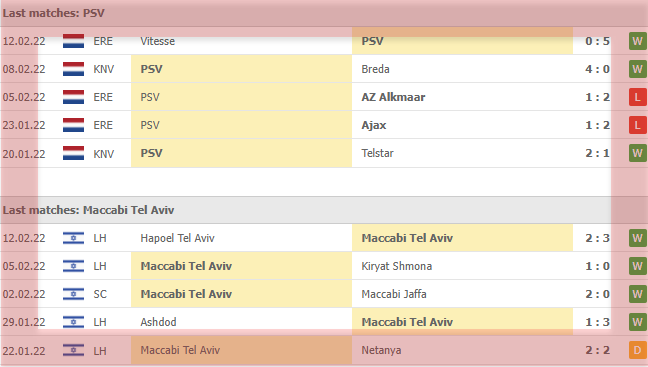