PSV vs G.A. Eagles – PSV Eindhoven will be looking to pick up their first win since losing to FC Emmen 1-0 in the Eredivisie last time out. FC Emmen’s goal was scored by Lucas Bernadou (24′).

In their last six games, PSV Eindhoven under Ruud van Nistelrooy have netted a total of 5 goals. Five goals have been scored against them in the same games, which is the equivalent number.

PSV Eindhoven had gone undefeated in their last two home league games before this contest. Go Ahead Eagles and FC Utrecht drew 2-2 in their previous meeting in the Eredivisie.

The Eagles have scored a total of 11 goals in their last six games. On each of those occasions, the Go Ahead Eagles also recorded a point. They have allowed six goals to fall into their own net during those games.

Previous results between these clubs show that the Go Ahead Eagles have lost these matches since October 12, 2016.

They haven’t been able to win any games at all, but PSV Eindhoven has kept an advantage over them by defeating them in each of those games.

In total, 20 goals were scored during those games between them, with Rood-Witten scoring 15 and Trots aan de IJssel scoring 5. This results in an average of 3.33 goals scored per game.

The two teams’ most recent league matchup was on Eredivisie Match Day 2 on August 13, 2022, with the Go Ahead Eagles defeating PSV Eindhoven 2–5. Referee Danny Makkelie was in charge.

René Hake, the head coach of the Go Ahead Eagles, has only one fitness concern out of a group that is largely available. Philippe Rommens is out with a fractured collarbone.

We believe that Go Ahead Eagles can score a goal against PSV Eindhoven, but it is unlikely that it will be sufficient to prevent a defeat.

Looking at the betting prices for the match on the full-time result market, the win for PSV Eindhoven can be had for 1.23, going for the draw is 6.55, and staking on the winning team to be Go Ahead Eagles gets 12. They are the best market prices that can be secured at the current time. 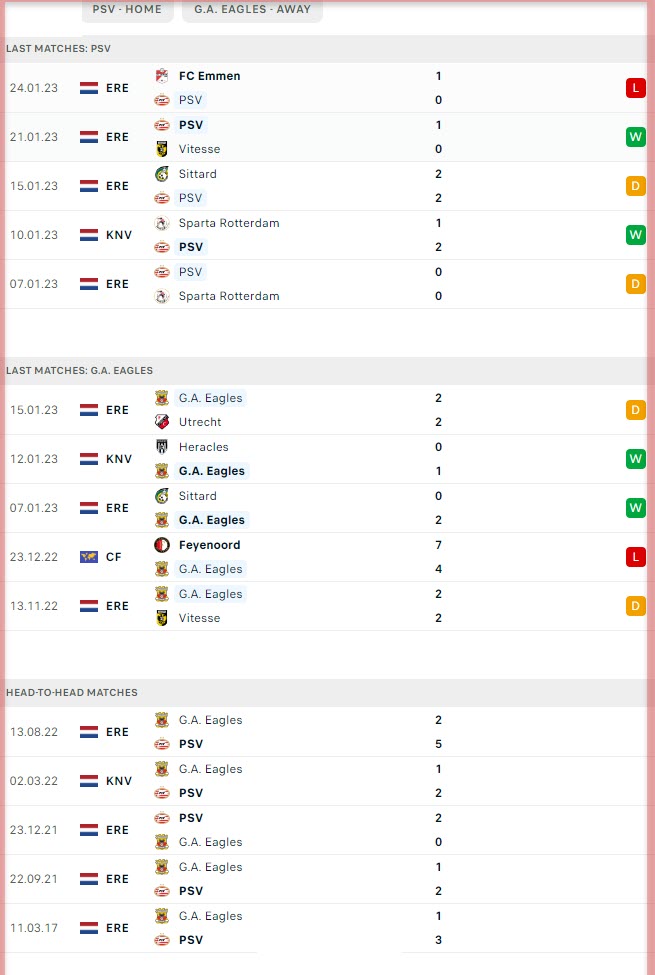