PSG vs Vllaznia – Preview, and Prediction

PSG vs Vllaznia – The hosts are unbeaten in four matches in all competitions, while the Albanian champions have won three league games.

PSG reached the semi-finals of the Champions League last season, but they have their work cut out to even qualify for the knockout stages this time around.

The French side beat Hacken 3-0 on aggregate to progress to the main draw, where they have picked up one point from two games.

As a result of a 1-0 defeat to Chelsea and a goalless draw away to Real Madrid, Gerard Precheur’s side are still searching for their first goal of the group stage.

The PSG boss will be concerned that his team have only hit the target on five occasions across their meetings with Chelsea and Real Madrid – only four teams have recorded fewer shots on goal than Les Parisiennes in the group stage this season.

PSG can at least take confidence from the fact that they are unbeaten in four matches in all competitions, while they have also scored at least two goals in their last three league games, including a 3-0 victory over Bordeaux at the weekend.

Meanwhile, Vllaznia earned their place in the group stage by beating Spartak Myjava and Vorskla Poltava in qualifying.

The Albanian side have found it tough going in the main draw after conceding 10 goals int their opening two games without scoring.

After losing 2-0 to Real Madrid, they travelled to Kingsmeadow to face Chelsea where they were thrashed 8-0 by the in-form English Champions.

While they have struggled defensively, Vllaznia will also need to improve in the final third in the Champions League after failing to record a shot on target in their first two group matches.

Vllaznia have managed to return to winning ways in the Albanian top-flight though, winning their last three league games by a combined 21-0 scoreline.

The hosts are expected to be without the services of Laurina Fazer and Marie-Antoinette Katoto due to injury issues.

Lieke Martens and Elisa de Almeida both missed Sunday’s win over Bordeaux, but the pair could return for Wednesday’s meeting with Vllaznia.

With PSG still looking for their first goal of the group stage, they will be looking towards Kadidiatou Diani, who has scored nine goals in all competitions this season.

As for the visitors, Kaylin Williams-Mosier could have her work cut out in the Vllaznia goal, although she is expected to be shielded by a back five.

Rrezona Ramadani could be in contention for a starting place after coming off the bench at half time against Chelsea.

The responsibility of leading the line for Vllaznia could fall to Maria Bashka, and will be supported by Megi Doci and Tarah Patterson, who are expected to operate as wingers.

Although PSG are yet to score in the group stage, we think they will open their account in style when they face Vllaznia on Wednesday.

PSG vs Vllaznia –  Head to Head 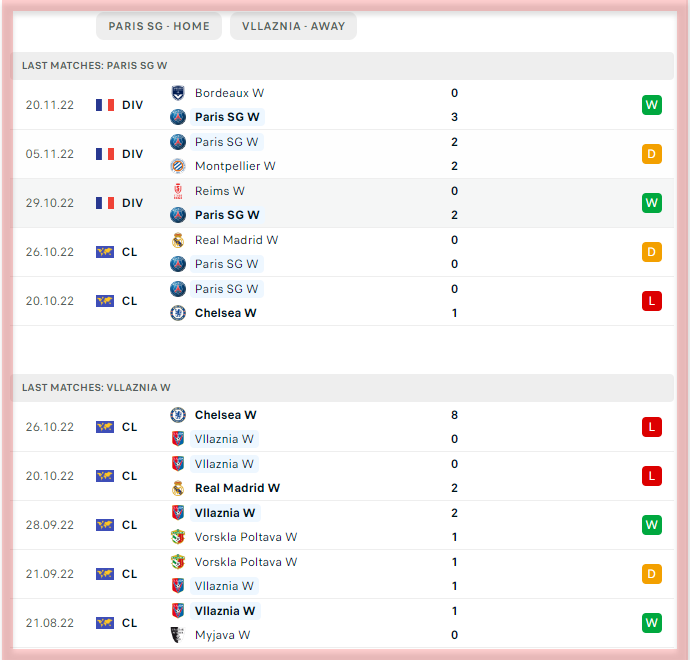