PSG vs Metz- Preview, and Prediction

PSG vs Metz- PSG, the ten-time Ligue 1 champions, will face relegation-threatened Metz at Parc des Princes on the final day of the season on Saturday evening.

The game is far more important for the visitors, who are looking to earn salvation points and avoid relegation to the playoffs.
Metz has climbed over Saint-Etienne in the race for 18th place in the league rankings after back-to-back massive wins over Lyon and Angers in the previous two rounds.

The bottom two teams (19th and 20th) will be relegated automatically, while the third-worst team (now Metz) will compete in relegation playoffs.

Nonetheless, while Metz will have a strong motivation advantage, PSG will have every advantage.
To make matters worse for the visitors, PSG’s talisman Kylian Mbappe is pursuing the Golden Boot trophy, and is now only one goal ahead of Monaco’s Wissam Ben Yedder in the standings.

Mbappe’s departure from Parc des Princes could also be imminent, as the teenage French striker has been linked with a move to Real Madrid for some time.

Last but not least, in the 0-4 thrashing of Montpellier on the road last Saturday, Lionel Messi finally looked sharp. On the night, the Argentine superstar scored twice, with both goals coming after Mbappe’s assists.

PSG will enter this match on the back of a run of twelve straight triumphs over Metz.
The run includes a 1-2 win for Les Parisiens at Stade Saint-Symphorien in the early part of the season.

Between these two sides, there is a huge quality gap. Regardless of motivation, we can’t see Metz causing any problems for the ten-time champions in this match.

Thus, at odds of 2.05., we will back Paris Saint-Germain to win by three or more goals difference in the last game of the season. You can also aim to score two or more goals with Kylian Mbappe on his (likely) final appearance at Parc des Princes. 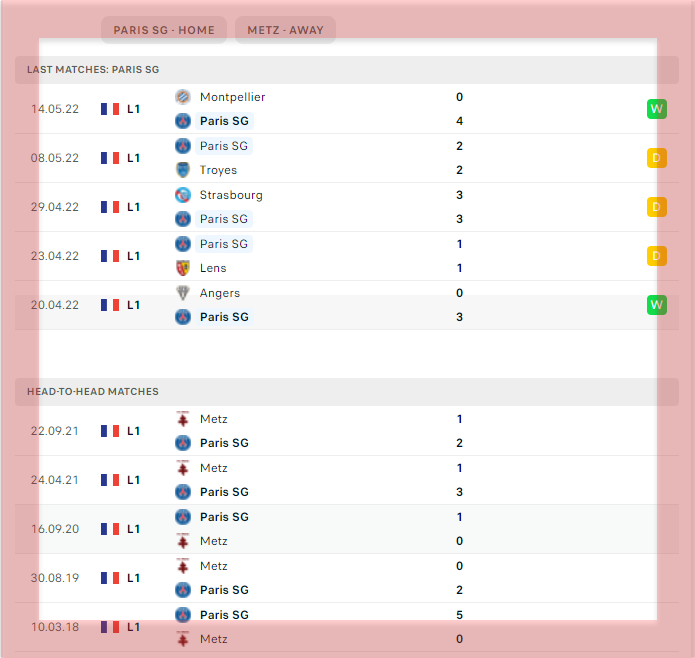