Portugal vs Ghana – Preview, and Prediction

Portugal vs Ghana –Portugal is consistently one of the top favourites in major tournaments, and Qatar 2022 will be no exception.

Despite numerous injury issues, including the absence of Diogo Jota, Fernando Santos still has access to a very quality collection of players.

For the final time in his career, Cristiano Ronaldo will be in charge of the Portuguese assault at the World Cup, and he will have a lot of support from Bernardo Silva and Bruno Fernandes, two other Premier League players.

After losing 0-1 against Spain on the penultimate day of the competition, Portugal dropped to second place in their individual Nations League group.

With the late home loss to Serbia during the World Cup Qualifications, they accomplished the same. Nevertheless, Santos’ team defeated Turkey and North Macedonia in the playoffs to guarantee another World Cup appearance.

Following their elimination of Nigeria on the basis of the away goal rule in the African WC Qualification playoffs, Ghana, who failed to qualify for the previous World Cup, is back this time (1-1 on aggregate).

Otto Addo’s team will be attempting to surpass the one-point victory that Ghana’s national team earned in the 2014 World Cup group stage in Brazil.

Ghana had a terrible tournament at the African Cup of Nations earlier this year, earning just one point in three games against teams like Comoros, Gabon, and Morocco.

When Ghana lost to Comoros in the tournament’s semifinals, their defence line appeared weak, surrendering three goals. We will also note that Ghana has conceded two goals in each of its three World Cup 2014 group stage contests.

In each of their three group stage games during their previous World Cup run, Ghana allowed two or more goals. One of the important players on Manchester City’s roster this year has been Bernardo Silva.

On the first day, Portugal should have little trouble cruising through Ghana. Ghana’s defence lacks self-assurance, therefore we anticipate Ronaldo and company to have a field day on Thursday.

The big wager is on Portugal to win and Over 2.5 goals FT at 2.40 odds, and we’ll also take a shot at Bernardo Silva scoring anytime at 4.33 odds.

Portugal vs Ghana – Head -to- Head 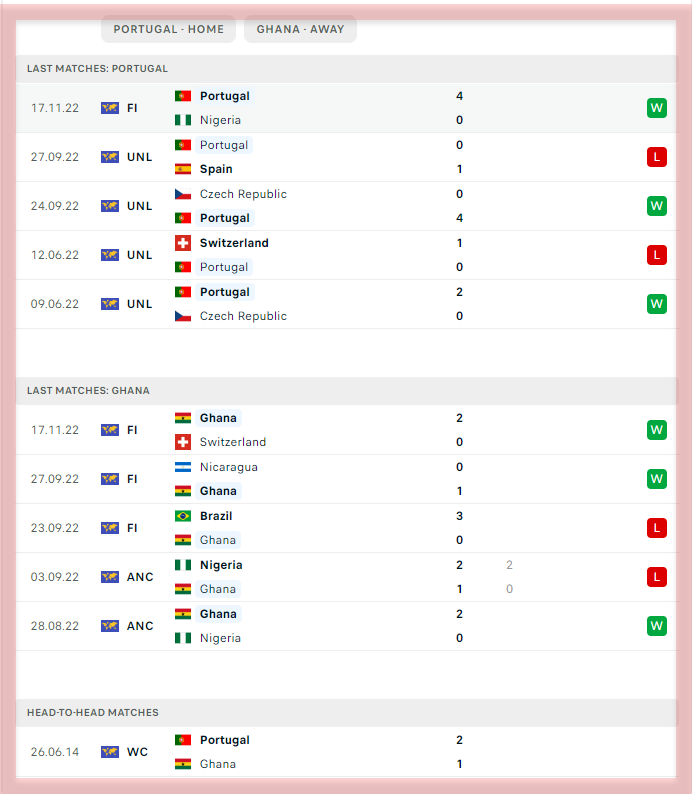