Ponferradina vs Tenerife – Preview, and Prediction

Ponferradina vs Tenerife – Last Sunday, Ponferradina defeated Albacete 0-1 on the road, snapping a three-game losing streak thanks to a late goal from replacement Espiau Hernandez.

For Jose Gomes’ troops, who had earlier escaped savage assaults from Albacete at Estadio Carlos Belmonte, it was a momentous occasion. Ponferradina managed to keep a clean sheet despite facing 18 shots (6 of which were on goal), scoring only once on five tries (two on goal).

Gomes’ team currently has three victories and three losses in their first six games. On Saturday afternoon at Estadio El Toralin, they will look to build on their victory over Tenerife from the previous weekend.

On the Segunda Division standings, the visitors are two points behind their Saturday counterparts. Since the beginning of the season, Tenerife has had inconsistent play.

Despite the fact that they have managed to win twice in their past three games, most observers agree that they perform considerably better at home than on the road.

The team led by Luis Miguel Ramis has lost all three of its away games so far this season, scoring just one goal in the process. Enric Gallego scored twice in the weekend’s 3-1 victory over Malaga at home.

The home court advantage has historically been quite important in this game, and we anticipate that it will be important in this particular tie as well. Tenerife has, after all, dropped each of its three away league games this season.

Additionally, Ponferradina kept a clean sheet last weekend against Albacete, while Tenerife has scored just one goal in three away games this season. For these reasons, we are highly interested in the Under 2.5 goals FT bet at the 1.66 odds.

Ponferradina vs Tenerife – Head -to- Head 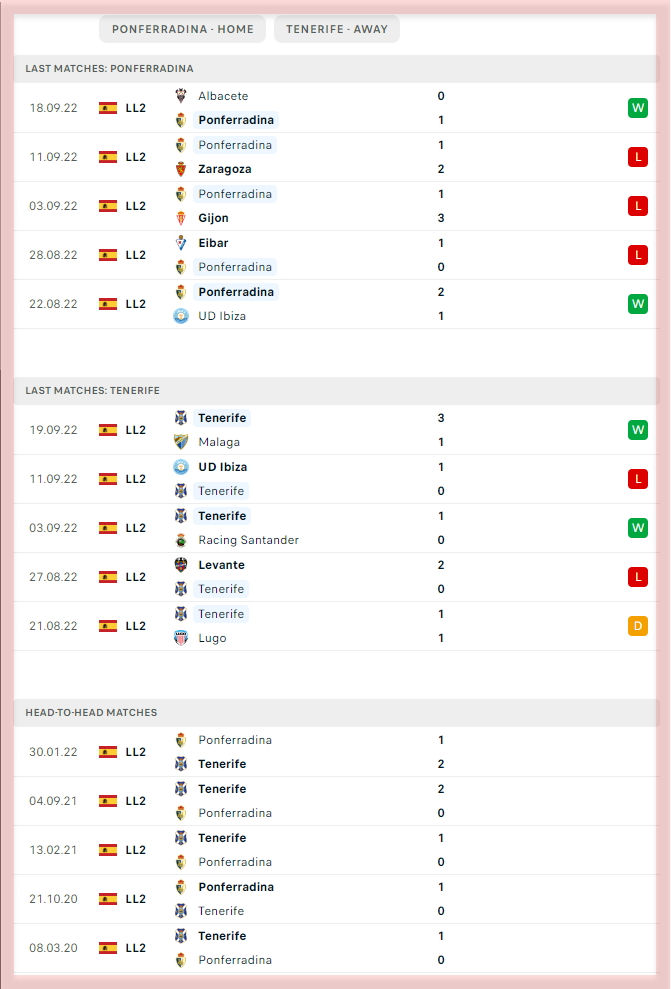