Poland vs Netherlands – Preview, and Prediction

Poland vs Netherlands – The Netherlands are adamant about making the semifinals at all costs. They are competing against Poland, who has already ruled out moving on to the next round, and are currently in first place in their group.

With the exception of one draw, the Dutch have not only kept a 100% winning record, but they have also scored the most and the fewest goals of any side in the group.

They also owe each other something. They lost to Portugal in the Nations League final, where they had advanced to the finals. They do, however, firmly think that now is their moment to shine. Additionally, they must get ready for the forthcoming World Cup.

Poland has been reduced to a one-trick pony in the interim. There are limitations to what one man can accomplish, and all they have up front is Robert Lewandowski.

This talented striker has not received much help from the team. They are already eliminated from the running for a spot in the semifinals. In addition, they also scored and conceded the fewest goals of any side in the competition.

In addition, they have a dismal history against this opponent in head-to-head competition, therefore taking into account all of these facts, predict Netherlands to win this Thursday.

The most recent match resulted in a 2-2 draw. Three goals or more were scored in six of the last seven matches. In their last six overall games, the Dutch have prevailed five times. In fact, they haven’t defeated this adversary since 1979, which is 43 years ago.

The last time the Poles had a perfect game was in 1986. Poland is on a three-game losing streak and has given up nine goals in that time. Their lone victory in the campaign came over Wales, who were in last position.

The Dutch, on the other side, have gone 13 games without a loss, and their most recent loss occurred in June 2021. Additionally, they managed to win nine of their last twelve games while scoring two or more goals in ten of their last twelve total contests. Expect a victory for the Netherlands this Thursday based on the teams’ recent results as well as previous head-to-head matches.

Poland vs Netherlands – Head -to- Head 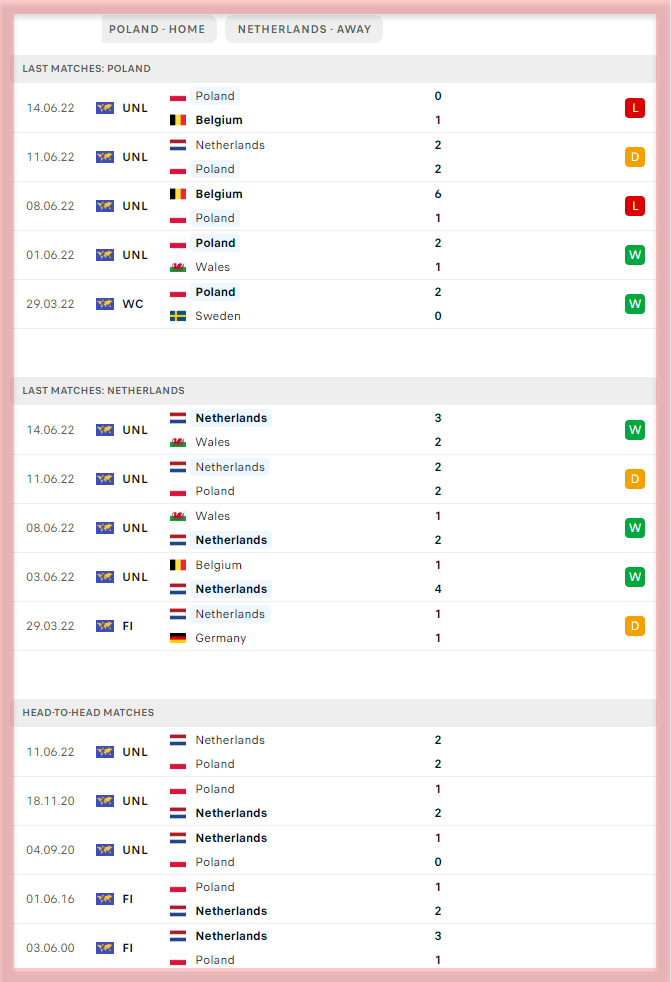