Plymouth vs Exeter – Preview, and Prediction

Plymouth vs Exeter – Plymouth has the best record in the league right now and hasn’t lost a league game in more than two months. At Home Park, the league’s top team will host Exeter for a crucial match.

The group now leads the standings by two points above Ipswich Town, who are their closest competitors. Goalkeeper Michael Cooper was instrumental in the 2-2 draw against Bristol Rovers by stopping five efforts on goal.

Last time, Exeter was unable to defeat Derby County, and the game finished in a scoreless tie. Matt Taylor is worried about his team’s road performance this year because they have lost their last three straight away games.

The club is still reeling from the 4-1 loss to Forest Green in the League Trophy competition. Manager Matt Taylor made the mistake of giving Harry Lee the opportunity to play goalkeeper in that game, and it backfired.

The very following game, Jay Lynch took over as the goalkeeper, and he quickly made a change. As the table toppers, we can anticipate that the home team will dominate this match.

After a five-year break, both teams will clash at Home Park; When these two sides met in 2019, Exeter prevailed 4-0. In two of their last three overall head-to-head games, the home team has scored three goals.

As our first prediction, you may wager on Plymouth scoring Over 2.5 goals, which has a 3.75 odd. This is after taking into account that the home team scored three goals in each of the previous two head-to-head games played at Home Park.

Our second prediction for this game is that Plymouth will win; the odds for this prediction are 1.95. The two sides have faced off four times since 2016, with the visitors coming out on top just once. Additionally, the host has a fantastic nine-game home winning run this year.

Plymouth vs Exeter – Head to Head 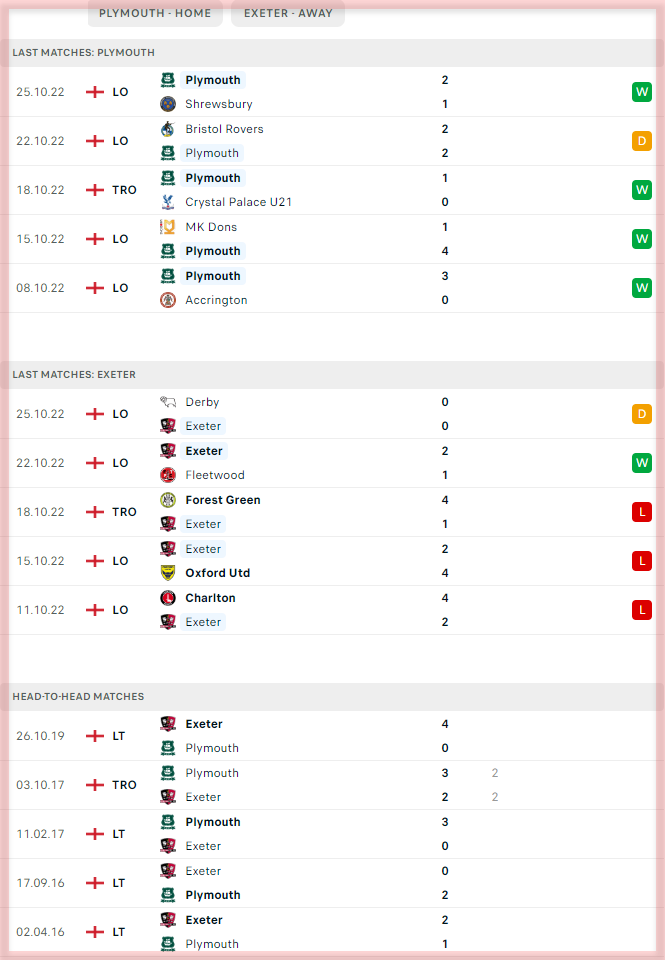