PEC Zwolle vs PSV Eindhoven -With only one game left, PSV Eindhoven will go on the road to Zwolle to try to end the season on a high note. This Sunday, these two teams will fight at MAC3PARK Stadion.

With 78 points from 33 games, PSV Eindhoven is in second place in the standings. They won the league 25 times, tied three times, and lost five times. This season, they gave the Eredivisie title to Ajax, even though they were only 4 points short. This happened after they lost their impressive early lead.

PSV will be coming into the game after beating NEC 3-2 in the Eredivisie in their last game. Now that they haven’t lost in 11 games, they are really picking up steam.

On the other hand, PEC Zwolle is at the very bottom of the table, with only 27 points and the 18th spot. In the league, they only won 7 of the 33 games they played. They tied 6 games and lost 20 others. They have already accepted that they will be sent down to the Eerste Divisie, so this game will be played only for pride.

The home team will be hoping for a better result after losing to Sparta Rotterdam 0–2 in their last league game. They haven’t scored in two of the last five games, so things haven’t been going well for them in front of the goal.

PSV has been a strong team, winning 14 straight head-to-head games. They also haven’t lost any of their last 11 league games away from home. Also, they have only lost twice on the road this season, which is a big deal.

Also, Zwolle hasn’t beaten this visitor in their last six home head-to-head matches. They are still the second worst team to play at home this season.
Since we know this, we think that PSV Eindhoven will beat Zwolle on Sunday. 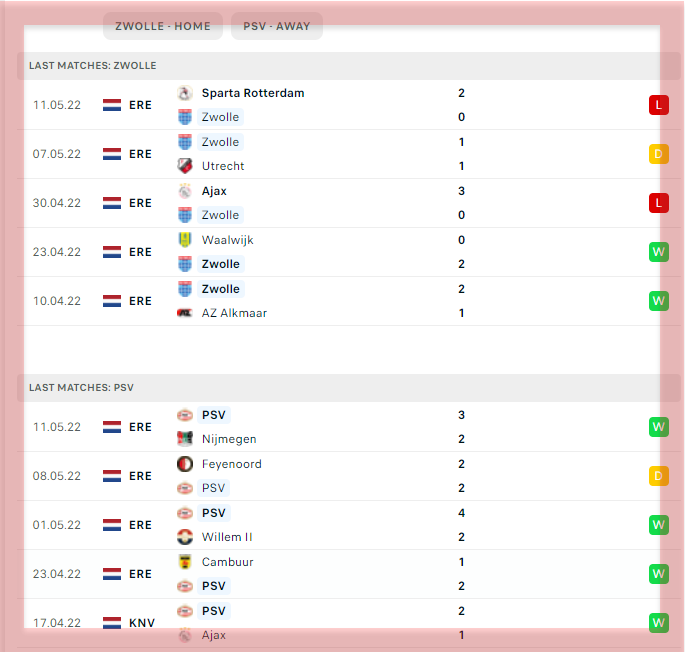