Partizan vs Feyenoord – preview and prediction – team news, and lineups

Partizan vs Feyenoord – Partizan won the previous Knockout stage with a 3-1 aggregate win over Sparta Prague. Following that, they will face Feyenoord in a sudden-death Conference League match at Stadion Partizana this evening.

Partizan is seen to be in good form in Conference League matches. They’ve been putting on some good performances lately. Aside from that, they lead the Super Liga table with the best attacking and defensive lineups in the league.

In their last ten matches across all competitions, they have nine wins and one defeat. Following the preceding, they will be sufficiently motivated to compete in this match.

Meanwhile, Feyenoord advanced to the knockout stages after going undefeated in the group stage. They finished first in Group E and have a strong offensive and defensive lineup.

They are third in the Eredivisie table and have had enough positive results so far. They have a good league record and will be hoping to steal a win to advance in the Conference League.

The caliber of both of these teams would be a source of concern. Feyenoord of the Eredivisie and Partizan of the Super Liga will have their own quarrels. Furthermore, they have yet to meet, and based on the form in their respective leagues, we can only expect a positive performance.

Partizan has been unbeaten at home for a long time. The majority of them include their league schedules. They have, however, won, drawn, and lost one of their last three Conference League games here. Goals have been leaked in all of them.

From the looks of things, Feyenoord will put on a good show. Both of these teams’ defenses have been leaking goals recently. As a result, expect plenty of goals here. 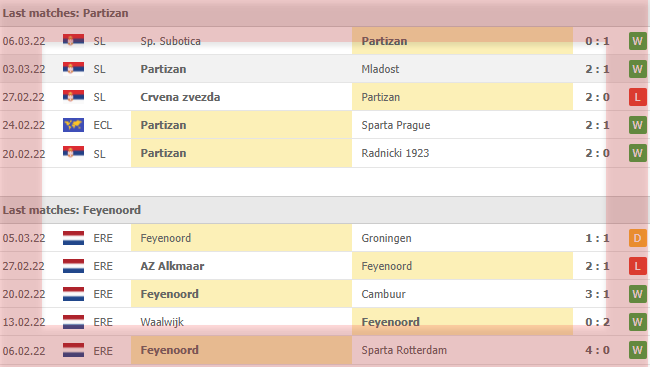