Paraguay vs Ecuador – preview and prediction

Paraguay vs Ecuador – Ecuador have a great chance to qualify for the Qatar 2022 World Cup with a victory over already-eliminated Paraguay in tomorrow’s penultimate Gameweek of South American World Cup Qualifications in Ciudad del Este.

Ecuador have been outstanding recently and will enter this match unbeaten in five consecutive qualifiers. The run is made even more impressive by the fact that it includes a scoreless draw with Colombia, a 2-0 victory over Chile, and a 1-1 draw with Brazil.

Gustavo Alfaro can be pleased with his team’s defensive performances in recent matches. Ecuador have conceded only two goals in their last five qualification matches, despite a somewhat difficult schedule.

We believe they can keep things quiet at the back against Paraguay, who have the worst attacking record in the competition, having scored just nine goals in 16 games.

Paraguay’s recent form has been completely opposite, with the team earning just one point in their previous six World Cup qualifiers. They are second to last in the South American standings and have long since given up hope of making it to Qatar.

Paraguay have significant problems with their lack of efficiency in the final third, having failed to score in seven consecutive qualifiers.

Ecuador have conceded just two goals in their last five qualifiers, while Paraguay have failed to score in their last seven World Cup Qualification matches. We’re going with the visitors at 2.30 odds, but you can also take Ecuador at 2.50 to keep a clean sheet tomorrow. 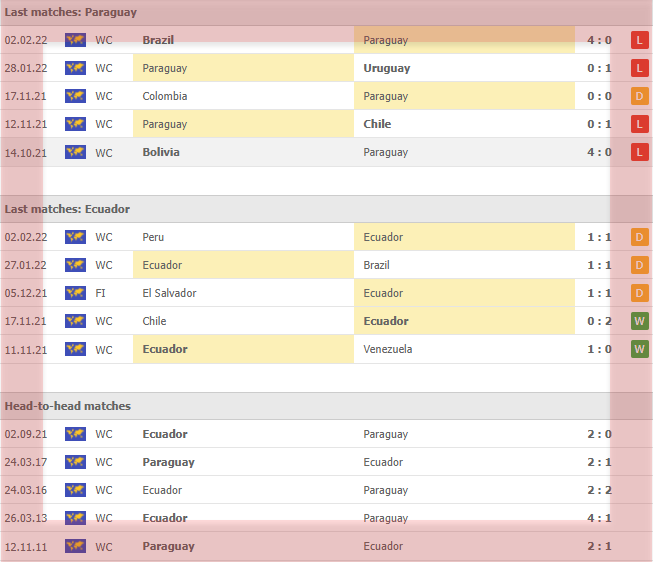