PAOK vs Gent – preview and prediction – team news, and lineups

PAOK vs Gent – PAOK and Gent will meet this Thursday at the Toumba Stadium in Thessaloniki in the Round of 16 of the inaugural UEFA Europa Conference League.

After finishing second in Group F of this tournament last year, PAOK was forced to compete in the knockout round playoffs. They were down a goal in the away and first legs, but came back to win 2-1 at home and take the tie to penalties to advance to this round.

Domestically, the team is currently undefeated in fourteen games, but they are likely to finish runners-up in the league and miss out on their third consecutive league title, trailing league leaders Olympiakos by twelve points with only ten games remaining in the season.

Gent finished first in Group B of this tournament thanks to dominating performances in the group stages. With four wins, a draw, and a loss, the club finished the group stages five points ahead of second-place Anorthosis.

Domestically, the club is on a five-match winning streak, which has propelled them to a position where they are vying for a place in the Championship round.

Following a seventh-place finish last season, they are now fifth in the league. With four games remaining, they are three points out of a top-four spot.

The hosts have scored in the first half of all of their matches in this tournament where they have been credited with a goal. Their opponents, on the other hand, have only done so once in the group stages. Given this observation, PAOK should be ahead at halftime. 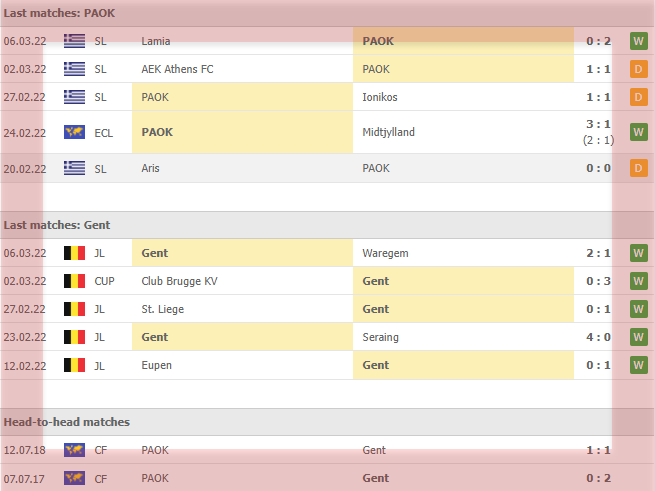