Osasuna vs Valencia – Preview, and Prediction

Osasuna vs Valencia – Osasuna comes into this match with a 1-1 La Liga draw against Real Madrid. Osasuna had 36% of the possession in that game and made 8 efforts on goal, scoring on two of them.

Kike Garca was the lone scorer for Osasuna (50′). Real Madrid made 22 shots at goal at the opposite end, with 4 of them being successful. Real Madrid’s goal came from Vinicius Jnior (42′).

In five of the last six games in which Osasuna played, there were fewer than three goals scored per game. According to the goal weighting from that era, Osasuna totaled 6 while the opposition’s teams totaled 5. But there’s no guarantee that pattern will continue into this game.

Valencia and Espanyol tied 2-2 in their previous match in La Liga. Valencia had a 63% possession advantage and 12 shot attempts, with 5 of them being successful. Eray Cömert (96′) and Gabriel Paulista (53′) scored goals for Valencia.  Five of Espanyol’s ten shots on goal were on target.

Espanyol scored with Joselu (56′) and Sergi Darder (83′). Looking at their recent results, Valencia has conceded goals in 5 of their previous 6 games, giving up a total of 7 goals.  Valencia has to improve on a few defensive flaws. Valencia hasn’t won away from home in their last 7 league games entering this matchup.

There is only one fitness issue for Osasuna manager Jagoba Arrasate due to an otherwise strong roster, thus almost everyone can be considered. Kike Saverio will be sidelined due to an Achilles tendon rupture.

There is only one fitness concern for Valencia manager Gennaro Gattuso because the team is largely healthy. Jaume Domenech won’t be playing because of a torn knee ligament.

In our opinion, Valencia will need favourable circumstances in order to score against Osasuna, who we believe will certainly score one of their own goals in a successful performance. Because of this, we believe that the final result will be 1-0 in favour of Osasuna in a very close game.

Osasuna vs Valencia – Head -to- Head 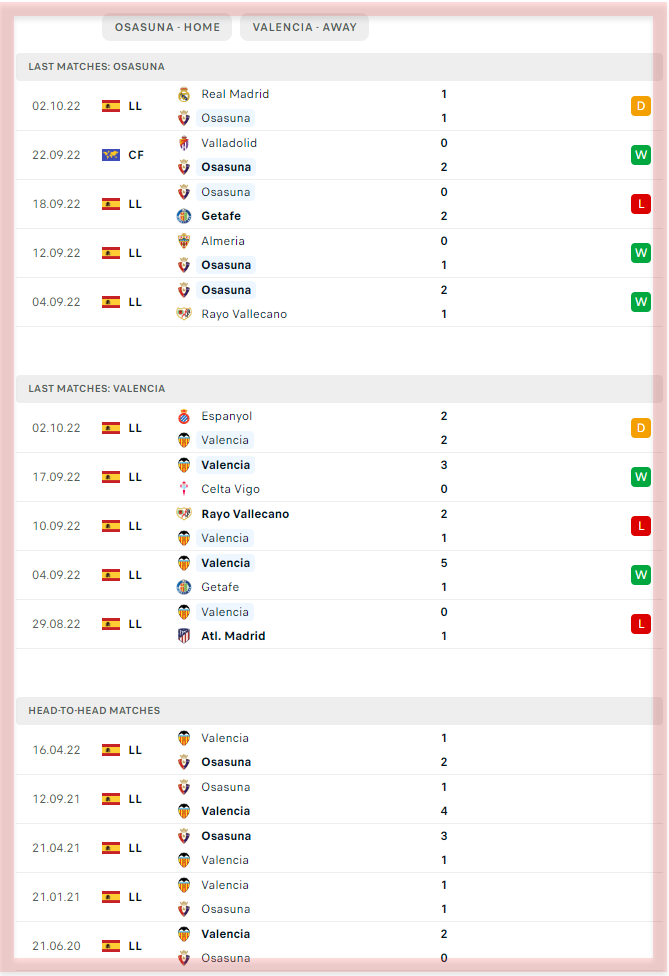